Open prostatectomy is a procedure for removal of an enlarged prostate gland.

The prostate gland undergoes several changes as a man ages. The pea size gland at birth grows only slightly during puberty, and reaches its normal adult shape and size (similar to a walnut) when a male is in his early twenties. The prostate gland remains stable until the mid-forties. At that time—in most men—the number of cells begins to multiply (cell multiplication), and the gland starts to enlarge. The enlargement—called hyperplasia—is due to an increase in the number of cells. Cell proliferation in the prostates of older men can cause symptoms (referred to as lower urinary tract symptoms, LUTS), which often include:

Other symptoms (called storage symptoms) sometime appear, and may include:

The cause of BPH is not fully understood. Currently, it is thought to be caused by a hormone that the prostate gland synthesizes, called dihydrotestosterone (DHT). This hormone is synthesized from testosterone by a prostatic enzyme called 5-alpha reductase.

Surgery is generally indicated for persons with moderate to severe symptoms, particularly if urinary retention is intractable or if the enlarged prostate (BPH) is related to recurrent urinary tract infections, blood in the urine, bladder stones, or kidney problems.

The cause of BPH is not entirely known; however, the incidence increases with advancing age. Before 40 years of age, approximately 10% of males have BPH. A small amount of hyperplasia is present in 80% of males over 40 years old. Approximately 8–31% of males experience moderate to severe lower urinary tract symptoms (LUTS) in their fifties. By age 80, about 80% of men have LUTS. A risk factor is the presence of normally functioning testicles; research indicates that castration can minimize prostatic enlargement. It appears that the glandular tissues that multiply abnormally use male hormones produced in the testicles differently than the normal tissues do.

Approximately 5.5 million American males have BPH. It is more prevalent in the United States and Europe, and less common among Asians. BPH is more common in men who are married rather than single, and there is a strong genetic correlation. A man's chance for developing BPH is greater if three of more family members have the condition.

The retropubic prostatectomy is accomplished through a direct incision of the anterior (front) prostatic capsule. The overgrowth of glandular cells (hyperplastic prostatic adenoma) is removed. These are the cells forming a mass in the prostate because of their abnormal multiplication.

A cystoscopy is performed prior to the open prostatectomy. The patient lies on his back on the operating table, and is prepared and draped for this procedure. Following the cystoscopy, the patient is changed to a Trendelenberg (feet higher than head) position. The surgical area is shaved, draped, and prepared. A catheter is placed in the urethra to drain urine. An incision is made from the umbilicus to the pubic area. The abdominal muscle (rectus abdominis) is separated, and a retractor is placed at the incision site to widen the surgical field. Further maneuvering is essential to clearly locate the veins (dorsal vein complex) and the bladder neck. Visualization of the bladder neck exposes the patient's main arterial blood supply to the prostate gland. Once the structures have been identified and the blood supply controlled, an incision is made deep into the level of the tumor. Scissors are used to dissect the prostatic tissue (prostatic capsule) from the underlying tissue of the prostatic tumor. The wound is closed after complete removal of the prostate tumor and hemostasis (stoppage of bleeding) occurs. 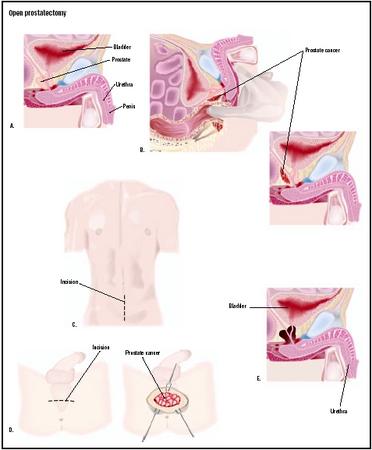 During a digital rectal exam (B), the doctor may feel an enlargement of the prostate that can be benign or cancerous. If an open prostatectomy is needed, an incision may made the lower abdomen (C) or the perineal area (D). In either case, the prostate and any cancer is removed (E). (
Illustration by GGS Inc.
)

The advantages of the retropubic prostatectomy include:

Suprapubic prostatectomy (also called transvesical prostatectomy) is a procedure to remove the prostatic overgrowth via a different surgical route. The suprapubic approach utilizes an incision of the lower anterior (front) bladder wall. The primary advantage over the retropubic approach is that the suprapubic route allows for direct visualization of the bladder neck and bladder mucosa. Because of this, the procedure is ideally suited for persons who have bladder complications, as well as obese men. The major disadvantage is that visualization of the top part of the tumor is reduced. Additionally, with the subrapubic approach, hemostasis (stoppage of bleeding during surgery) may be more difficult due to poor visualization after removal of the tumor.

Using a scalpel, a lower midline incision is made from the umbilicus to the pubic area. A cystotomy (incision into the bladder) is made, and the bladder inspected. Using electrocautery (a special tool that produces heat at the tip, useful for hemostasis or tissue excision) and scissors, dissection proceeds until the prostatic tumor is identified and removed. After maintaining hemostasis and arterial blood supply to the prostate, the incisions to the bladder and abdominal wall are closed.

The presence of symptoms is indicative of the disease. Age also has an associated risk for an enlarged prostate, and can help establish diagnostic criteria.

Men must have a special blood test called the prostate specific antigen (PSA) and routine digital rectal examination (DRE) before surgery. If the PSA levels and DRE are suspiciously indicative of prostate cancer, a transrectal ultrasound guided needle biopsy of the prostate must be performed before open prostatectomy, to detect the presence of prostate cancer (carcinoma).

Additionally, preoperative patients should have lower urinary tract studies, including urinary flow rate and post void residual urine in the bladder. Because most patients are age 60 or older, preoperative evaluation should also include a detailed history and physical examination ; standard blood tests; chest x ray; and electrocardiogram (EKG) to detect any possible preexisting conditions.

Open prostatectomy is a major surgical operation requiring an inpatient hospital stay of four to seven days. Blood transfusions are generally not required due to improvements in surgical technique. Immediately after the operation, the surgeon must closely monitor urinary output and fluid status. On the first day after surgery, most patients are given a clear liquid diet and asked to sit up four times. Morphine sulfate, given via a patient controlled analgesic pump (IV), is used to control pain.

On the second postoperative day, the urethral catheter is removed if the urine does not contain blood. Oral pain medications are begun if the patient can tolerate a regular diet.

On the third postoperative day, the pelvic drain is removed if drainage is less than 75ml/24 hr. The patient should gradually increase activity. Follow-up with the surgeon is necessary following discharge from the hospital . Full activity is expected to resume within four to six weeks after surgery.

Improvements in surgical technique have lowered blood loss to a minimal level. For several weeks after open prostatectomy, patients may have urgency and urge incontinence. The severity of bladder problems depends on the patient's preoperative bladder status. Erectile dysfunction occurs in 3–5% of patients undergoing this procedure. Retrograde (backward flow) ejaculation occurs in approximately 50–80% of patients after open prostatectomy. The most common non-urologic risks include pulmonary embolism, myocardial infarction (heart attack), deep vein thrombosis, and cerebrovascular accident (stroke). The incidence of any one of these potentially adverse effects is less than 1%.

Normally, patients will not have the adverse effects of bleeding. Hematuria (blood in the urine) is typically resolved within two days after surgery. The patient should begin a regular diet and moderate increases in activity soon after surgery. His pre-surgical activity level should be restored within four to six weeks after surgery.

The overall rate of morbidity and mortality is extremely low. The overall mortality (death) rate for open prostatectomy is approximately zero.

For smaller prostates, treatment using medication may help to control abnormal prostatic growth. When the prostate gland is large (75 grams and bigger), surgery is indicated.

My husband is about to undergo the above type of surgery (supra) and I believe that his information will inform him immensely.
3
sameen

i want to learn more about the surgical procedure if you guide me in this issues i will be glade form your organ.
thanks
4
AD

HELLO !!
MY HUSBAND HAD OPEN RETROPUBIC PROSTATECTOMY 6 WEEKS ADO, BUT HE STILL HAVE PAIN ON HIS EGGS.
IS IT NORMAL AND HOW LONG IT WILL BE?
THANK YOU
AD
5
ria

My father had the surgery one week a go and he's still bleeding, is this normal? the Doctors are saying its normal up to 10 days but some of the articles I been reading the bleeding suppose to stop after 2 days, any advice, pls help.thanks
6
Joseph Cefalu

Excellent article. I had the superapubic surgery a year ago. I now have a hard time emptying my bladder. At night when I get up is the best flow I get. I think that is because the bladder muscles are more relaxed then. Durning the day it sometimes take three to five minutes to start to pee. I know I have retention of the bladder.I have passed blooded tissue three times since the surgery.Dr did a scope did not see a problem.

Please advise as what should I do now.

Fantastic and prefect article and it is a good remedy to my nightmare surgeries.It is now 17 days after my second prostatectomy.The first one happened to show leakage and drain from the bladder neck ,urine drained from the lower sutures for 4 days after the 8th day of the first surgery .Now i,m ok ,urine flow is ok with no tissue particles,catheter and sutures were removed ,but still i have slight pain in the surgery area.and i,m not sure about the second one survival.thank you very much .
Subhi Sadeek