Cricothyroidotomy is usually regarded as an emergency surgical procedure in which a surgeon or other trained person cuts a hole through a membrane in the patient's neck into the windpipe in order to allow air into the lungs. Cricothyroidotomy is a subtype of surgical procedure known as a tracheotomy ; in some situations, it is considered an elective alternative to other types of tracheotomy.

The primary purpose of a cricothyroidotomy is to provide an emergency breathing passage for a patient whose airway is closed by traumatic injury to the neck; by burn inhalation injuries; by closing of the airway due to an allergic reaction to bee or wasp stings; or by unconsciousness. It may also be performed in some seriously ill patients with structural abnormalities in the neck. Some surgeons consider a cricothyroidotomy to be preferable to a standard tracheotomy in treating patients in an intensive care unit .

The demographics of cricothyroidotomies are difficult to establish because the procedure is relatively uncommon in the general population, even in emergency situations. In the emergency room, the incidence varied between 1.7% and 2.7%. A study found that nine of a group of 1,560 patients admitted for blunt or penetrating injuries of the neck required emergency cricothyroidotomies, or about 0.5%.

Another study found that the most important single cause of injuries requiring emergency cricothyroidotomy was traffic accidents (51%), followed by gunshot and knife wounds (29%); falls (5%); and criminal assault (5%).

Most cricothyroidotomies are performed on adolescent and young adult males, because this group accounts for the majority of cases of neck trauma in the United States. It is estimated that injuries to the neck account for 5–10% of all serious traumatic injuries. 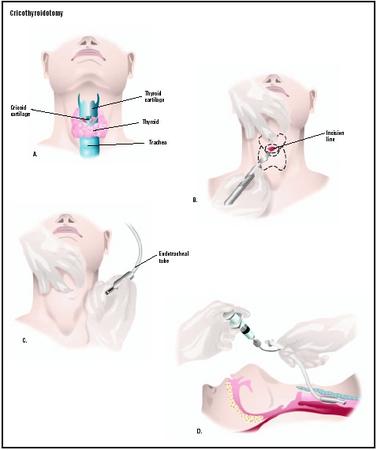 To perform a cricothyroidotomy, the surgeon makes an incision into the cricoid cartilage of the throat (B). The incision is held open while an endotracheal tube is inserted (C). The tube is secured in the trachea to maintain an airway for the patient (D). (
Illustration by GGS Inc.
)

In a surgical cricothyroidotomy, the doctor or other emergency worker makes an incision through the cricothyroid membrane into the trachea in order to insert a piece of tubing for ventilating the patient.

The primary concerns in emergency medical treatment are sometimes known as the ABCs: Airway patency (openness), Breathing, and Circulation. Keeping the airway patent is critical to an injured person's survival. The signs of a blocked airway in people are obvious, including a bluish complexion (cyanosis); noisy breathing, unusual breath sounds, or choking; emotional agitation or panic; and often loss of consciousness.

In an emergency situation, the following are considered reasons for performing a cricothyroidotomy first rather than attempting to open or clear the patient's airway by other methods:

When the doctor has located the cricothyroid membrane, he or she will scrub the skin over it with a povidone-iodine solution to prevent infection.

In a needle cricothyroidotomy, the doctor uses a 12- or 14-gauge catheter and needle assembly. The needle is advanced through the cricothyroid cartilage at a 45-degree angle until the trachea is reached. When the doctor is able to withdraw air through the syringe, he or she knows that the catheter is in the correct spot. The catheter is then pushed forward over the needle, which is then removed. An endotracheal tube connector is then fitted onto the end of the catheter and connected to a bag-valve unit with an oxygen reservoir.

A needle cricothyroidotomy will supply the patient with enough oxygen for about 40–45 minutes; it is a time-limited technique because it does not allow the efficient escape of carbon dioxide from the bloodstream. It will, however, help to ventilate the patient until he or she can be taken to a hospital or trauma center.

Needle cricothyroidotomy is the only form of this procedure that can be done in children under 12 years of age. The reason for this restriction is that the upper part of the trachea is not fully developed in children, and a surgical incision through the cricothyroid membrane increases the risk of the child's developing subglottic stenosis, which is a condition in which the trachea is abnormally narrow below the level of the vocal cords due to an overgrowth of soft tissue. It is often seen in children who were intubated as infants.

In a surgical cricothyroidotomy, the doctor steadies the patient's thyroid cartilage with one hand and makes a horizontal (transverse) incision across the cricothyroid membrane. The incision is deepened until the airway is reached. The doctor then rotates the edge of the scalpel 90° in order to open the incision to receive an endotracheal or tracheotomy tube. A hemostat or surgical clamp may be used to hold the incision open while the doctor prepares to insert the tube through the opening into the trachea. After checking the tube to make certain that it is in the proper location, the doctor tapes it in place. If necessary, the doctor may use suction to clear the patient's airway.

In some emergency situations, the doctor or other medical professional may not have an antiseptic available to cleanse the skin over the patient's throat, and may have to use any sharp-edged implement that is handy to make the incision. Emergency cricothyroidotomies have been performed with scissors, hunting or pocketknives, razor blades, broken glass, and the jagged edges of a lid from a tin can. The airway has been held open with such objects as paper clips, nail clippers, the plastic barrel from a ballpoint pen, and a piece of plastic straw from a sports water bottle.

A needle cricothyroidotomy must be replaced by a formal surgical tracheotomy or other means of ventilating the patient within 45 minutes.

A surgical cricothyroidotomy can be left in place for about 24 hours, but should be replaced within that time period by a formal tracheotomy performed in a hospital operating room .

Other aspects of aftercare depend on the cause of the airway blockage and the nature of the patient's injuries. The head and neck contain major blood vessels, a large portion of the central nervous system, the organs of sight, smell, hearing, and taste, and the central airway—all within a relatively small area. Injuries to the face and neck often require treatment by specialists in neurology, trauma surgery, otolaryngology, ophthalmology, and plastic surgery as well as by specialists in emergency medicine.

The risks of a needle cricothyroidotomy include:

The risks of surgical cricothyroidotomy include:

Normal results for a needle cricothyroidotomy would be adequate ventilation of a patient with a blocked airway for a brief period of time of about 45 minutes.

Normal results of a surgical cricothyroidotomy would be adequate ventilation in emergency circumstances of a patient with a blocked airway for a period of about 24 hours.

In general, cricothyroiditomy has a very low mortality rate, even when performed outside a hospital. By contrast, the mortality rate for patients who lose airway patency is 33%. Overall, emergency cricothyroidotomy is considered an effective way to create an emergency surgical airway with low overall morbidity.

Under ideal circumstances, a cricothyroidotomy would be performed in a hospital emergency room, ICU, or trauma center by a general surgeon, otolaryngologist, or anesthesiologist. Because it is an emergency procedure, however, a medical student, physician's assistant, paramedic, or nurse may also perform cricothyroidotomies. Many trauma centers require paramedics and nurses specializing in emergency medicine to practice performing cricothyroidotomies at least twice a year in a clinical laboratory in order to keep their skill level high. Since the procedure is risky but uncommon, it is important for emergency personnel to feel comfortable with the equipment and techniques required.

My son had gun shot wound under his chain straight up to his forehead. He was alive for 12 days. But I did not see any other surgery procedures done except the criconthyroidotomy which was done from Balad Iraq. They flew him to Lanhstul Germany Hospital,and his face was blown up like a balloon, his nose was plug with 2 feminine tampons with the strings hanging on his face. Old blood smelly from his wound and I had to remind the nurse on duty to please change the cotton on his forehead and neck that cover the wound. The surgeon that meet us in Germany brief us about the condition of my son that part of his brain was compressed. How can not be if there is no oxygen traveling to his brain. I asked them to transfer my son to Walter Reed Army Medical Center if he is stable to fly and have his treatment there. They flew us the next day and the surgeons at the hospital told me that his brain already compressed except the lower part that give him the reflex. My son died after 12 days of the accident. My son's vital organs are perfectly stable and my question is; Is there a chance that my son could have survive if they operate him as soon as possible? Your input is greatly appreciated.
3
Sharon

Those, most likely, were not femine tampons that were in your son's nose. They were specially designed sponges that have strings that look like tampons and maybe called tampons too. Either way, they are perfectly designed to apply pressure to stop bleeding in a small spaces.
4
SHAKUN

My brother had this due to reaction to medicine. The result was a double lung collapse and a 2 week stay to recover from the consequences. How often does this occur. He was static in we on guerny. Was the nurse incompetent or was he just really unlucky?