A vasovasostomy is a surgical procedure in which the effects of a vasectomy (male sterilization) are reversed. During a vasectomy, the vasa deferentia, which are ducts that carry sperm from the testicles to the seminal vesicles, are cut, tied, cauterized (burned or seared), or otherwise interrupted. A vasovasostomy creates an opening between the separated ends of each vas deferens so that the sperm may enter the semen before ejaculation.

The purpose of a vasovasostomy is to restore a man's fertility, whereas a vasectomy, or male sterilization, is performed to provide reliable contraception (birth control). Research indicates that the level of effectiveness in preventing pregnancy is 99.6%. Vasectomy is the most reliable method of contraception and has less risk of complications and a faster recovery time than female sterilization methods.

In many cases, a vasectomy can be reversed. Vasectomy reversal does not, however, guarantee a successful pregnancy. The longer the time elapsed since a man has had a vasectomy, the more difficult the reversal and the lower the success rate. The rate of sperm return if a vasovasostomy is performed within three years of a vasectomy is 97%; this number decreases to 88% three to eight years after vasectomy, 79% by nine to 14 years, and 71% after 15 years. In addition, other factors affect the success rate of vasectomy reversal, including the age of the female partner, her fertility potential, the method of reversal used, and the experience of the surgeon performing the procedure. 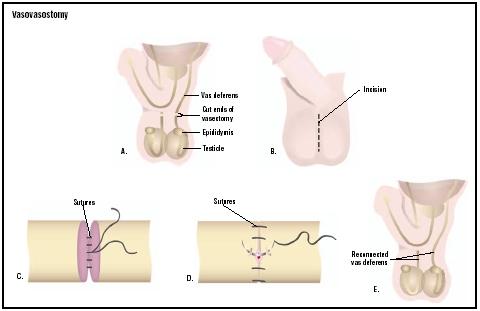 In a vasovasostomy, the surgeon makes an incision in scrotum at the site of the vasectomy scar (B). The spermatic cords are located, and the two vas deferens are reconnected with two layers of suture (C and D). (
Illustration by GGS Inc.
)
prior vasectomies. A vasovasostomy may also be performed on occasion to relieve pain associated with post-vasectomy pain syndrome.

An estimated 5% of men who have had a vasectomy later decide that they would like to have children. Some reasons for wanting a vasectomy reversal include death of a child, death of a spouse, divorce, or experiencing a change in circumstances so that having more children is possible. One study found that divorce was the most commonly reported reason for a vasovasostomy and that the average age of men requesting a vasovasostomy is approximately 40 years.

About 7.4% of infertile men have primary genital tract obstructions caused by trauma, gonorrhea or other venereal infections, or congenital malformations of the vasa deferentia. Many of these men are good candidates for surgical treatment of their infertility.

Most surgeons prefer to have the patient given either a continuous anesthetic block or general anesthesia because of the length of time required for the operation. A vasovasostomy generally takes two to three hours to perform, depending on the complexity of the surgery and the experience of the operating physician. More complex surgeries may take as long as five hours. The advantage of general anesthesia is that the patient remains unconscious for the duration of the surgery, which ensures that he remains comfortable. Regional anesthesia, such as a spinal block, allows the patient to remain awake during the procedure while blocking pain in the area of the surgery.

After an adequate level of anesthesia has been reached, the surgeon will make an incision from the top of one side of the scrotum, sometimes moving upward as far as several inches (centimeters) into the abdominal area. A similar incision will then be made on the other side of the scrotum. The vasa deferentia will be identified and isolated from surrounding tissue. Fluid will be removed from the testicular end of each vas deferens and analyzed for presence of sperm. If sperm are found, then a simpler procedure to connect the cut ends of the vasa deferentia will be performed. If no sperm are found, a more complex procedure called a vasoepididymostomy or epididymovasostomy (in which the vas deferens is attached to the epididymis, a structure in which the sperm mature and are stored) may be more successful in restoring sperm flow.

There are two techniques that may be used to reconnect the cut ends of the vasa deferentia. A single-layer closure involves stitching the outer layer of each cut end of the tube together with a very fine suture thread. This procedure takes less time but is often less successful in restoring sperm flow. A double-layer closure, however, involves stitching the inner layer of each cut end of the tube first, and then stitching the outer layer. After reconnection is established, the vasa deferentia are returned to their anatomical place and the scrotal incisions closed.

Before a vasovasostomy is performed, the patient will undergo a preoperative assessment, including a physical examination of the scrotum. This evaluation will allow the surgeon to determine what sort of vasectomy reversal should be performed and how extensive the surgery might be. A medical history will be taken. The physician will review the patient's medical records in order to determine how the patient's vasectomy was performed; if large portions of the vasa deferentia were removed during surgery, the vasectomy reversal will be more complicated and may have a lower chance of success. The patient's partner should also undergo a fertility assessment, including a gynecologic exam, to assess her reproductive health.

Some surgeons prefer to give the patient a broad-spectrum antibiotic about half an hour before surgery as well as a mild sedative.

After the procedure the patient will be transferred to a recovery room where he will remain for approximately three hours. The patient will be asked to void urine before discharge. Pain medication is prescribed and usually required for one to three days after the procedure. Antibiotics may be given after the procedure as well as beforehand to prevent infection. Ice packs applied to the scrotum will help to decrease swelling and discomfort. Heavy lifting, exercise , and sexual activity should be avoided for up to four weeks while the vasovasostomy heals.

Patients are usually allowed to return to work within three days. They may shower within two days after surgery, but should avoid soaking the incision (by taking a tub bath or going swimming) for about two weeks. The surgeon will schedule the patient for an incision check about a week after surgery and a semen analysis three months later.

The complications that most commonly occur after vasovasostomy include swelling, bruising, and symptoms associated with anesthesia (nausea, headache, etc.). There is a risk of low sperm count if the operation is done inadequately or if scarring partially blocks the channel inside the vasa deferentia. Less common complications are infection or severe hematoma (collection of blood under the skin). The most serious potential complication of a vasovasostomy is testicular atrophy (wasting away), which may result from damage to the spermatic artery during the procedure.

If a successful vasectomy reversal has been performed, the average time to achieving pregnancy after the procedure is one year, with most pregnancies occurring within the first two years. A good sperm count usually returns within three to six months.

The chance that the vasa deferentia will become obstructed after a successful reversal is approximately 10%. Some doctors recommend that patients bank their sperm as a precautionary measure. Scrotal hematoma occurs in 1–2% of patients after vasovasostomy, and infection in less than 1%.

A vasoepididymostomy may be performed if the physician determines that a vasovasostomy will be insufficient in restoring sperm flow. The determining factor is usually the absence of sperm or fluid in the testicular end of the cut vas deferens (which is found during surgery), although a swollen or blocked epididymis found during a preoperative scrotal examination may also indicate a vasoepididymostomy will be necessary.

There are some options available to men and their partners who are seeking to conceive after a vasectomy but wish to avoid vasectomy reversal. As sperm are no longer present in the man's ejaculate, they may be retrieved from the testicle or epididymis by extraction (removal of tissue) or aspiration (removed by a needle). The sperm may then be incubated with a female egg under carefully controlled conditions, then transferred to the female uterus once fertilization has occurred; this process is called in vitro fertilization (IVF). A process called intracytoplasmic sperm injection (ICSI) may be used to improve the success rate of IVF; in this procedure, a single sperm is injected into the female egg.


A vasovasostomy can be performed in a hospital, clinic, or doctor's office on an outpatient basis. The procedure is generally performed by a urologist, a medical doctor who has completed specialized training in the diagnosis and treatment of diseases of the urinary tract and genital organs.

Pleaze provide me of the time period i can rezume exsercising on my bicycle and wont it damage anything after a vasovasectomy?
2
heather

what technique do you recommend for reestablishing sperm flow
3
kristelle

I just want to know if this is called a vasectomy reversal because I spoke to our urologist the prosudure is +-r20 000.
4
Andrew

my husband already have vasectomy,but we wanted to have 1 more baby,so is that have chance to have baby if do vasovasostomy?how many % will have chance?we really hope for that,thanks much.
6
John

What could happen if the partner has intercourse before the 3 weeks.
8
Tom

If I get a reversal vasectomy will the liquid be more substantial, or expected, after an ejaculation than was previously seen since my original vasectomy?
Thank you, Tom