The Surgeon General of the United States defines exercise as physical activity that involves planned, structured, and repetitive bodily movements in order to improve or maintain physical fitness. As an element of health, exercise involves both strength training of the muscles and cardiovascular fitness, with stretching activities for flexibility. Most research on physical activity for fitness stresses the intensity and regularity of exercise as key elements. Typical exercise activities include fast walking, running, cycling, swimming, or aerobics classes. The latest Centers for Disease Control and Prevention report, in conjunction with the American Council on Sports Medicine, recommends that all adults perform 30 or more minutes a day of moderate-intensity activity for 5–7 days per week. The National Institutes of Health Consensus Development Conference Statement on Physical Activity and Cardiovascular Health identifies inactivity as a major public health problem in the United States. They have recommended exercise regimens 5–7 days a week for people who are already active, and such leisure activities as gardening, walking, using stairs instead of an elevator, cleaning house and recreational pursuits etc., for people who are largely sedentary.

One important purpose of exercise is speeding recovery from surgery. Nowhere is being fit as important as when a person is facing surgery or recovering from surgery. Regular exercise leads to important health advantages, including weight loss; greater cardiovascular efficiency; lower cholesterol levels; increased musculoskeletal strength and flexibility; and better functioning of the metabolic, endocrine and immune systems. These effects diminish with lack of exercise within two weeks if physical activity is substantially reduced; the fitness effects disappear altogether within two to eight months if physical activity is not resumed.

With regard to preparing for surgery , the effects of regular exercise on all body systems create optimal responses both to the surgical procedures itself and during the postoperative recovery period.

Most adults in North America would benefit from increasing their level of physical activity. The majority of adults in the United States (55%) are overweight, and two-thirds of those with weight problems are likely also to have diabetes, heart disease, high blood pressure, or 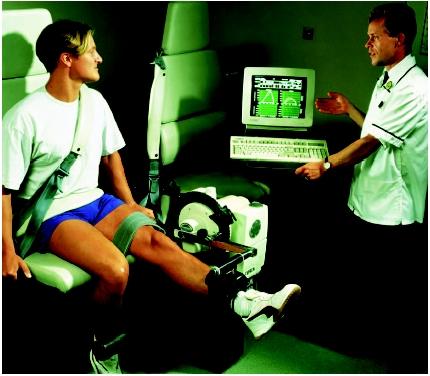 Exercise can be used to restore muscle strength after surgery. A computer monitors this man's performance and provides a visual display of his progress. (
Photograph by Geoff Tompkinson. Science Source/Photo Researchers. Reproduced by permission.
)

other obesity-related conditions. A sedentary lifestyle and unhealthy eating patterns are responsible for at least 300,000 deaths each year from chronic diseases. It is estimated that two-thirds of people over 65 have at least one chronic condition, with 36 million Americans suffering from some form of arthritis. More than 300,000 total joint replacement procedures are performed each year due to osteoarthritis. Lack of physical activity contributes substantially to conditions like osteoarthritis, low back pain, and osteoporosis.

Obesity reached epidemic proportions among adults in the United States in the years between 1987 and 2000. Over 45 million adults are obese; in addition, the percentage of young people who are overweight has more than doubled in the last 20 years. Despite the benefits of physical activity, more than 60% of American adults do not get enough physical activity to provide health benefits. More than 25% are not active in their leisure time. Insufficient activity increases with age; it is also more common in women than men and among those with lower levels of economic stability and educational achievement.

The direct consequences of obesity include:

Over 25 million Americans will undergo surgery in 2003. Each patient's surgical risk, complications and outcomes will depend upon how fit they are; how well their cardiovascular and pulmonary systems withstand the stress of anesthesia; how quickly their bones and muscles recover after surgical procedures; and how well their metabolic and immune systems respond to surgery and the risk of infection. The general physical status of the patient is the most important factor in preparing for surgery. This status is determined by the physician, including his or her evaluation of the specific procedures to be performed. On the other hand, however, the patient's lifestyle may affect management of the surgery both before and after the actual procedures. A healthful diet, regular exercise, and quitting smoking are highly recommended before surgery. Each of these factors has an important role to play in optimal functioning of the circulatory and pulmonary systems. Smoking should cease two weeks before surgery to be beneficial.

After surgery, it is important to return to daily activities when the physician gives permission to do so. Most doctors encourage their patients to be as active as possible as soon as possible. While aftercare is individualized, and physicians may place certain limitations on physical activity for specific patients, walking as soon as the patient is able to walk is generally recommended. The patient should be as active as possible within the limits set by the physician for postoperative recovery, with the goal of returning to his or her normal daily activities and exercise routines. The patient should ask the physician for explicit guidelines about returning to an established exercise program or other physical or recreational activities.

The benefits of exercise before, after surgery and continuing as a daily life activity cannot be overemphasized. There are risks, however, for people who begin an exercise program without having had one in the past. Patients should always have a physical examination before taking up an exercise program for the first time or after a long period of inactivity.

Such high-intensity exercise regimens as high-impact aerobics and jogging are not recommended as often as they once were for helping patients attain a specific fitness level as measured by resting heart rate and muscle mass. Walking, swimming, and gardening can all contribute to aerobic fitness. Strength training with resistance exercises for the arms and legs using weights or bands is now an important aspect of physical fitness. These exercises can be done at a moderate rate, with the number of repetitions increased over time. Stretching is very important to both kinds of exercise activities.

Without exercise and a healthful diet, people burn fewer calories than they take in, resulting in increasing weight gain. While the formula is familiar, the outcomes are surprising. According to studies based on a newer index for obesity—the body mass index or BMI—people who are overweight or obese have dramatically shorter life spans. In fact, some studies are showing that individuals who are fat in middle age are as likely to lose years of life as those who smoke. Researchers have found obesity and overweight combined are the second leading cause of preventable death in the United States, behind tobacco use. Correlating the BMI—calculated from a person's weight in kilograms divided by height in meters squared—and the mortality of different cohorts of subjects in large longitudinal studies, researchers have found that the lowest mortality rates from all causes were found among those having a BMI between 23.5 and 24.9 for men and 22.0–23.4 for women. The strongest association between obesity and death from all causes are found among individuals with the highest BMI—people with a BMI of 40+. Clinical obesity is defined as a BMI of 30 or above. Morbid obesity is defined as a BMI of 40 or above.

With respect to health care, people who are obese have higher rates of complications in the hospital. Researchers in New York studied a group of patients who were in the intensive care unit (ICU) for a variety of causes, and found that those who were morbidly obese were far more likely to die of their illness than those who were closer to their desirable weight (23.3% vs. 6.1%). Patients who were morbidly obese had higher rates of transferrals to nursing homes from the ICU, rather than being discharged to their homes—over 16% for the obese patients compared to 3% for patients who were less overweight.

"Nutritional Disorders: Obesity." Section 1, Chapter 5 in The Merck Manual of Diagnosis and Therapy , edited by Mark

Report of the Surgeon General. Physical Activity and Health . Centers for Disease Control and Prevention, National Center for Chronic Disease Prevention and Health Promotion, The President's Council on Physical Fitness and Sports, 1996. http://www.sgreports.nlm.nih.gov

Agency for Health Care Practice and Research. Assessing a Patient's Willingness to Adopt Dietary and Lifestyle Changes is the First Step Toward Sustained Weight Loss . Research Archives, No. 237 (May 2000). http://www.ahcpr.gov/research/may00/050.

Sir,please provide me some informtion particulaly about mckenzi exercises.i would like to know about mckenze in detail.
please tell about it at earlist.
Thanking you, with regards.
your's truly,
jags
2
Don Lloyd

I am recovering from arterial bypass surgery, but I still experience pain and numbness in my leg. I am inquiring about the length of recovery before I may be free from pain and numbness.My health otherwise is excellent.
3
charles quinn

Iam recovering from fem pop surgery, but I stay in pain and feel numbness in my leg , what is the proberbilities this pain will ever end.