Sentinel lymph node biopsy (SLNB) is a minimally invasive procedure in which a lymph node near the site of a cancerous tumor is first identified as a sentinel node and then removed for microscopic analysis. SLNB was developed by researchers in several different cancer centers following the discovery that the human lymphatic system can be mapped with radioactive dyes, and that the lymph node(s) closest to a tumor serve to filter and trap cancer cells. These nodes are known as sentinel nodes because they act like sentries to warn doctors that a patient's cancer is spreading. 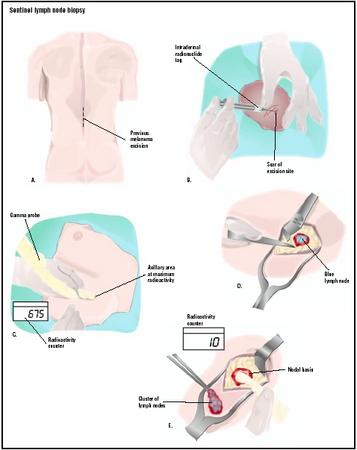 The first descriptions of sentinel nodes come from studies of penile and testicular cancers done in the 1970s. A technique that uses blue dye to map the lymphatic system was developed in the 1980s and applied to the treatment of melanoma in 1989. The extension of sentinel lymph node biopsy to the treatment of breast cancer began at the John Wayne Cancer Institute in Santa Monica, California, in 1991. As of 2003, SLNB is used in the diagnosis and treatment of many other cancers, including cancers of the head and neck, anus, bladder, lung, and male breast.

A sentinel lymph node biopsy is done in two stages. In the first part of the procedure, which takes one to two hours, the patient goes to the nuclear medicine department of the hospital for an injection of a radioactive tracer known as technetium 99. A doctor who specializes in nuclear medicine first numbs the area around the tumor with a local anesthetic and then injects the radioactive technetium. He or she usually injects a blue dye as well. The doctor will then use a gamma camera to take pictures of the lymph nodes before surgery. This type of imaging study is called lymphoscintigraphy.

After the lymphoscintigraphy, the patient must wait several hours for the dye and the radioactive material to travel from the tissues around the tumor to the sentinel lymph node. He or she is then taken to the operating room and put under general anesthesia. Next, the surgeon injects more blue dye into the area around the tumor. The surgeon then uses a hand-held probe connected to a gamma ray counter to scan the area for the radioactive technetium. The sentinel lymph node can be pinpointed by the sound made by the gamma ray counter. The surgeon makes an incision about 0.5 in long to remove the sentinel node. The blue dye that has been injected helps to verify that the surgeon is removing the right node. The incision is then closed and the tissue is sent to the hospital laboratory for examination.

Some cancer patients should not be given an SLNB. They include women with cancer in more than one part of the breast; women who have had previous breast surgery, including plastic surgery; women with breast cancer in advanced stages; and women who have had radiation therapy. Melanoma patients who have undergone wide excision (removal of surrounding skin as well as the tumor) of the original skin cancer are also not candidates for an SLNB.

Apart from evaluating the patient's fitness for an SLNB, no additional preparation is necessary.

A sentinel lymph node biopsy does not require extensive aftercare. In most cases, the patient goes home after the procedure or after an overnight stay in the hospital.

The surgeon will discuss the laboratory findings with the patient. If the sentinel node was found to contain cancer cells, the surgeon will usually recommend a full axillary lymph node dissection (ALND). This is a more invasive procedure in which a larger number of lymph nodes—usually 12–15—is surgically removed. A drainage tube is placed for two to three weeks and the patient must undergo physical therapy at home.

Risks associated with an SLNB include the following:

Sentinel lymph node biopsies have a high degree of accuracy, with relatively few false negatives. A negative laboratory report means that there is a greater than 95% chance that the other nearby lymph nodes are also free of cancer.


An SLNB is usually performed in a hospital that has a department of nuclear medicine, although it is sometimes done as an outpatient procedure. The radioactive material or dye is injected by a physician who specializes in nuclear medicine. The sentinel lymph node is removed by a surgeon with experience in the technique. It is then analyzed in the hospital laboratory by a pathologist, who is a doctor with special training in studying the effects of disease on body organs and tissues.

The accuracy of a sentinel lymph node biopsy depends greatly on the skill of the surgeon who removes the node. Recent studies indicate that most doctors need to perform 20–30 SLNBs before they achieve an 85% success rate in identifying the sentinel node(s) and 5% or fewer false negatives. They can gain the necessary experience through special residency programs, fellowships, or training protocols. It is vital for patients to ask their surgeon how many SLNBs he or she has performed, as those who do these biopsies on a regular basis generally have a higher degree of accuracy.

Very indeed knowledgeable. Definitions are clear and can be use as reference for giving seminars.

Hi, I went for a lymph node excision two weeks ago. The wound is still draining a lot. Is this normal? Regards, Dawie van Staden.
3
Tuberculosis Test

Improving the accuracy of Tuberculosis Test cancer staging. Cancer staging is a system that classifies malignant tumors according to the extent of their spread in the body. It is used to guide decisions about treatment.
4
ashleyroth

I underwent breast augmentation after I had a sentinel node removed, and I have to warn you that sometimes itâ€™s better to pay a little bit more and go to a more reputable doctor. Iâ€™m not going to list his name because itâ€™s not like a got an infection or was a victim of malpractice or anything â€“ itâ€™s just that he has a poor eye for his work, to put it mildly. If you really want to see what I mean (and have the constitution for this sort of thing) look at the breast augmentation before and after pictures. I understand that I am still recovering from the removal of the lymph node, but this is obviously a botched job here. I guess thatâ€™s what I get for getting the operation in Chula Vista.
5
oliver

Thanks for your article. You describe so clearly with the picture images. Sentinel lymph node biopsy is doing well job. also gives us the information about cells, cancer, tube etc. I want to take generic viagra so is it convince for me as i am 20 year old girl with big breast.
6
Vista bay rehab

Its out of questionable that sentinel lymph node biopsy works better than previous technique of cancer removal, and its a solution without much side affects like previous techniques. recent studies showed that the process is improving and its a matter of days for using it massively for such cases.
7
Diana

I recently had a sentinel lymph node biopsy and have had a small spot of yellow every since the steri strips fell off about 10 days afterwards. Is this an infection that I should be concerned about? It has since grown to be about 1/2 inch where the incision was.
8
Evangeline Barba

I had sentinel lymph node biopsy on my rt breast Aug.2 2018 . There was a question on my admission paper whether i had lymph node dissection ,do i have to answer yes and if so they will put vascular alert and they will prevent putting iv on my rt arm.