A rectal resection is the surgical removal of a portion of the rectum.

Rectal resections repair damage to the rectum caused by diseases of the lower digestive tract, such as cancer, diverticulitis, and inflammatory bowel disease (ulcerative colitis and Crohn's disease). Injury, obstruction, and ischemia (compromised blood supply) may require rectal resection. Masses and scar tissue can grow within the rectum, causing blockages that prevent normal elimination of feces. Other diseases, such as diverticulitis and ulcerative colitis, can cause perforations in the rectum. Surgical removal of the damaged area can return normal rectal function.

Colorectal cancer affects 140,000 people annually, causing 60,000 deaths. Incidence of the disease in 2001 differed among ethnic groups, with Hispanics having 10.2 cases per 100,000 people and African Americans having 22.8 cases per 100,000. Rectal cancer incidence is a portion of the total colorectal incidence rate. Surgery is the optimal treatment for rectal cancer, resulting in cure in 45% of patients. Recurrence due to surgical failure is low, from 4–8%, when the procedure is meticulously performed.

Crohn's disease and ulcerative colitis, both chronic inflammatory diseases of the colon, each affect approximately 500,000 young adults. Surgery is recommended when medication fails patients with ulcerative colitis. Nearly three-fourths of all Crohn's patients will require surgery to remove a diseased section of the intestine or rectum.

During a rectal resection, the surgeon removes the diseased or perforated portion of the rectum. If the diseased or damaged section is not very large, the separated ends are reattached. Such a procedure is called rectal anastomosis.

A number of tests identify masses and perforations within the intestinal tract.

To cleanse the bowel, the patient may be placed on a restricted diet for several days before surgery, then placed 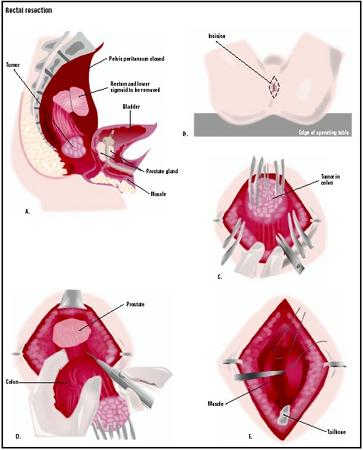 A tumor in the rectum or lower colon can be removed by a rectal resection (A). An incision is made around the patient's anus (B). The tumor is pulled down through the incision (C). An attached area of the colon is also removed (D). The area is repaired, leaving an opening for bowel elimination (E). (
Illustration by GGS Inc.
)
on a liquid diet the day before, with nothing by mouth after midnight. A series of enemas and/or oral preparations (GoLytely, Colyte, or senna) may be ordered to empty the bowel. Oral anti-infectives (neomycin, erythromycin, or kanamycin sulfate) may be ordered to decrease bacteria in the intestine and help prevent post-operative infection. The operation can be done with an abdominal incision (laparotomy) or using minimally invasive techniques with small tubes to allow insertion of the operating instruments ( laparoscopy ).

Postoperative care involves monitoring blood pressure, pulse, respiration, and temperature. Breathing tends to be shallow because of the effect of the anesthesia and the patient's reluctance to breathe deeply due to discomfort around the surgical incision. The patient is taught how to support the incision during deep breathing and coughing, and given pain medication as necessary. Fluid intake and output is measured, and the wound is observed for color and drainage.

Fluids and electrolytes are given intravenously until the patient's diet can be resumed, starting with liquids, then adding solids. The patient is helped out of bed the evening of the surgery and allowed to sit in a chair. Most patients are discharged in two to four days.

Rectal resection has potential risks similar those of other major surgeries. Complications usually occur while the patient is in the hospital and the patient's general health prior to surgery will be an indication of the risk potential. Patients with heart problems and stressed immune systems are of special concern. Both during and following the procedure, the physician and nursing staff will monitor the patient for:

Symptoms that the patient should report, especially after discharge, include:

Complete healing is expected without complications. The recovery rate varies, depending on the patient's overall health prior to surgery. Typically, full recovery takes six to eight weeks.

Mortality has decreased from nearly 28% to under 6%, through the use of prophylactic antibiotics before and after surgery.

If the section of the rectum to be removed is very large, the rectum may not be able to be reattached. Under those circumstances, a colostomy would be preformed. The distal end of the rectum would be closed and left to atrophy. The proximal end would be brought through an opening in the abdomen to create an opening, a stoma, for feces to be removed from the body.


Rectal resections are performed by general surgeons and colorectal surgeons as in-patient surgeries under general anesthesia.

I am currently ~3 weeks post-op from diverticulitis sigmoid resection using the open technique.
I have to daily pack a faulty staple wound with the aid of lidocaine, saline & a saint of a wife-nurse for another week or so.

Am starting to have lower rectal pain following cessation of defecation, urination & ejaculation.

Is this normal?. (No blood or mucus observed)
2
kathy

After a laproscopic resection surgery why would a person have numbness and minimal tingling to the right side? That of course is also the side the temporary ileostomy is on, so the patient did not lie on this side during surgery. Any ideas or suggestions? Thank-You
PS I am a nursing student and this is a new symptom for me and can't find an answer anywhere else.
3
David Dillard

I read this study looking for the pain management used after the procedure. And found none! I myself have a large tumor which has opened up on both sides of the anus, it looks like two big flaps opening up. This is basically open wounded so nerves r exposed inside and outside. I am terminal and a total resection they said is out of the question. So hear I lay un able to walk for 7 months due to pain/ bed bound and suffering of soo much pain No one can imagine the pain. I'm looking for a pain reliever paste cream jel.. Oh any thing that will help relieve some of this. Being open wounds it is a hard find but I'm hoping by word of association of others some one has an idea I have not tried. So I beg for some type of help,advice,referal, anything that might help. Please help me please!!! Thank u so mu for reading this and I pray some how good can come from this.
4
michelleking

Warm or hot water is the only thing that gives me relief. Hope it helps u. Baths, showers,spas,hot water bottles and heat bags. Good luck an all my best wishes for you.
5
Susan

My mom had rectal cancer stage 3, already had colostomy bag. July 13th the surgeon did the resection, she has cut in abdomen, and rectal area. My question is should she still be in a lot of pain? I havent seen much improvment. She is in constant pain, nausea, vomiting, foul dicharge, some bleeding.. and when i asked her surgeon he just said its normal and to expect a slow recovery due to radiation and chemo. He has me packing the wound now, but still havent seen any change. Should we just wait like the DR says?
6
Brenda

It depends on how long it's been since surgery. After a few weeks I would take my mom back to the doctor to have her checked. God Bless you..
7
suzie

My husband had rectum cancer 1 year ago and this is his 6 month cat scan and the doctor says it shows fluid in the rectum colon area. What does this mean?
8
jozina

In 2009 I had a part of the colon removed due to cancer. They placed a permanent stoma.
In a space above the tailbone abscesses started to form, finally they removed the rectum in 2011.
That left a long wound from that space to where the anus was.
This wound is very difficult to close they say, because of radiation during the initial operation.
Home nurse has to rinse it every day with a female catheter. Yellow "slime"??? comes out.
Has anybody else undergone this? How long before the wound will heal, because I can't imagine I
have to live like this for the rest of my life??
9
Lala

My husband just had rectal surgery.The drainage is still going on how long this mucus will stay.He is getting very depress with the drainage.
10
candi

Due to many rectal surgeries. I wanted to if having a partial resection surgery would be good for. Also can your rectum inner fear with your digestive area.