Antibiotics may be informally defined as the subgroup of anti-infectives derived from bacterial sources and used to treat bacterial infections.

Antibiotics are used for treatment or prevention of bacterial infection. Other classes of drugs, most notably the sulfonamides , may be effective antibacterials. Similarly, some antibiotics may have secondary uses, such as the use of demeclocycline (Declomycin, a tetracycline derivative) to treat the syndrome of inappropriate antidiuretic hormone (SIADH) secretion. Other antibiotics may be useful in treating protozoal infections.

Although there are several classification schemes for antibiotics, based on bacterial spectrum (broad versus narrow), route of administration (injectable versus oral versus topical), or type of activity (bactericidal versus bacteriostatic), the most useful is based on chemical structure. Antibiotics within a structural class will generally show similar patterns of effectiveness, toxicity, and allergic potential.

Cephalosporins and the closely related cephamycins and carbapenems, like the penicillins, contain a beta-lactam chemical structure. Consequently, there are patterns of cross-resistance and cross-allergenicity among the drugs in these classes. The "cepha" drugs are among the most diverse classes of antibiotics, and are themselves subgrouped into first, second, and third generations. Each generation has a broader spectrum of activity than the one before. In addition, cefoxitin (Mefoxin), a cephamycin, is highly active against anaerobic bacteria, which makes it useful in prevention and treatment of infections of the intestines. The third generation drugs, cefotaxime, ceftizoxime, ceftriaxone, and others, cross the blood-brain barrier and may be used to treat meningitis and encephalitis. Cephalosporins are the usually preferred agents for prevention of infection during surgery.

The fluroquinolones are synthetic antibacterial agents, and are not derived from bacteria. They are included here because they can be readily interchanged with traditional antibiotics. An earlier, related class of antibacterial agents, the quinolones, were not well absorbed, and could be used only to treat urinary tract infections. The fluroquinolones, which are based on the older group, are broad-spectrum bactericidal drugs that are chemically unrelated to the penicillins or the cephalosporins. They are well distributed into bone tissue, and so well absorbed that in general they are as effective by the oral route as by intravenous infusion.

Tetracyclines got their name because they share a chemical structure having four rings. They are derived from a species of Streptomyces bacteria. Broad-spectrum bacteriostatic agents, the tetracyclines may be effective against a wide variety of microorganisms, including rickettsia and amebic parasites.

The macrolide antibiotics are derived from Streptomyces bacteria, and got their name because they all have a macrocyclic lactone chemical structure. Erythromycin, the prototype of this class, has a spectrum and use similar to penicillin. Newer members of the group, azithromycin and clarithyromycin, are particularly useful for their high level of lung penetration. Clarithromycin has been widely used to treat Helicobacter pylori infections, the cause of stomach ulcers. For people who are allergic to penicillin, erythromycin is a valuable alternative. But, unlike penicillin, erythromycin can be very irritating 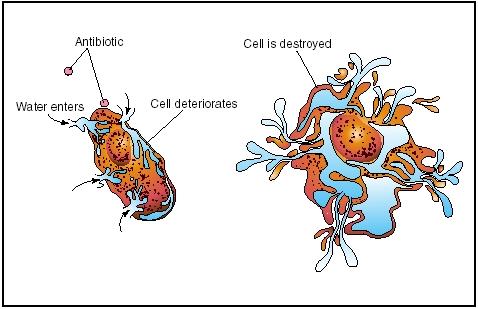 Different antibiotics destroy bacteria in different ways. Some short-circuit the processes by which bacteria receive energy. Others disturb the structure of the bacterial cell wall, as shown in the illustration above. Still others interfere with the production of essential proteins. (
Illustration by Electronic Illustrators Group.
)
both to the stomach when given by mouth, or to veins when given by injection.

Other classes of antibiotics include the aminoglycosides, which are particularly useful for their effectiveness in treating Pseudomonas aeruginosa infections, and the lincosamindes, clindamycin and lincomycin, which are highly active against anaerobic pathogens. In addition, other individual drugs are available that may have utility in specific infections.

Dosage varies with drug, route of administration, pathogen, site of infection, and severity. Additional considerations include renal (kidney) function, age of patient, and other factors. Patients should consult manufac turers' recommendations or ask their doctors.

All antibiotics cause risk of overgrowth by non-susceptible bacteria. Manufacturers list other major hazards by class; however, the health care provider should review each drug individually to assess the degree of risk. Generally, breastfeeding is not recommended while taking antibiotics because of risk of alteration to infant's intestinal flora, and risk of masking infection in the infant. Excessive or inappropriate use may promote growth of resistant pathogens.

Use of all antibiotics may temporarily reduce the effectiveness of birth control pills; alternative birth control methods should be used while taking these medications. Antacids should be avoided while on tetracyclines as the calcium can impair absorption of this antibiotic class. For this reason, tetracyclines should not be taken just before or after consuming foods rich in calcium or iron. Consult specialized references for additional interactions to specific antibiotics.

To minimize risk of adverse reactions and development of resistant strains of bacteria, antibiotics should be restricted to use in cases where there is either known or a reasonable presumption of bacterial infection. The use of antibiotics in viral infections is to be avoided. Avoid use of fluroquinolones for trivial infections.

In severe infections, presumptive therapy with a broad-spectrum antibiotic such as a third generation cephalosporin may be appropriate. Treatment should be changed to a narrow spectrum agent as soon as the pathogen has been identified. After 48 hours of treatment, if there is clinical improvement, an oral antibiotic should be considered.

When the pathogen is known or suspected to be Pseudomonas , a suitable beta-lactam drug is often prescribed in combination with an aminoglycoside. A single agent cannot be relied upon for treatment of Pseudomonas . When the patient has renal insufficiency, azactam should be considered in place of the aminoglycoside.

In treatment of children with antibiotic suspensions, caregivers should be instructed in use of oral syringes or measuring teaspoons. Household teaspoons are not standardized and will give unreliable doses.

Alliance for the Prudent Use of Antibiotics. Consumer Information. http://www.tufts.edu/med/apua/Patients/patient.html .

l am looking for a list fo the Antibiotic for patient who are chronic kidney failure or Polycystic kidney disease
could you recomded us whihc is most comand used ?
please give us an advise?
2
SOUVIC SAHA

PLEASE SEND ME THE LIST OF DIFFERENT ANTIBIOTICS & THEIR RESPECTIVE LIST OF SUSCEPTIBLE BACTERIA AND THEIR CORRESPONDING CAUSING BACTERIAL DISEASES.
3
Bisera

I want to be up dated with the latest antibiotics, doses and their use on infections.
5
Ben Johnston

Dear Sir/Madam, i am enquiring to kmow if there is anything that prevents flucloxacillin from functioning properly. your response would be appreciated asap
6
cheryl aquino

Dear sir/Madam, i am happy that you have this article!> it help us student to save our time in searching.
7
rosemary

iam drinking this pills for a bacteria and i realy want to no for what are they for, i no infeccion but which one is it. metronidazole 500 mg,, generic,,, flagyl,, will you please give me some unwers,, thank you,,
8
farooq

please ,
I want to asking about the patient have psudomonus and he had renal failure
what's the antibiotic should be used?

how many antibiotics do we take wen we say 3times daily?? is it 3within 24h inclusively or 4inclusively
10
Christianadaniel

I ve' been suffering from pseudomonas for more than a year it wil go & come back again.pls help me with names of drugs or injection.my blood group is 0+.tanks
11
Arajoosarma

I just want to know the side efct of taking antibiotic injection.
12
Karleigh

I am currently working on a project for my Microbiology class and am contacting you for your permission to use the above image for illustration purposes only.
Thankyou
13
bob

my names bob Marley if you don't know me i'm a rapper .