Liposuction, also known as lipoplasty or suction-assisted lipectomy, is cosmetic surgery performed to remove unwanted deposits of fat from under the skin. The surgeon sculpts and re-contours a person's body by removing excess fat deposits that have been resistant to reduction by diet or exercise . The fat is permanently removed from under the skin with a suction device.

Liposuction is intended to reduce and smooth the contours of the body and improve a person's appearance. Its goal is cosmetic improvement. It is the most commonly performed cosmetic procedure in the United States.

Liposuction does not remove large quantities of fat and is not intended as a weight reduction technique. The average amount of fat removed is about a quart (liter). Although liposuction is not intended to remove cellulite (lumpy fat), some doctors believe that it improves the appearance of areas that contain cellulite, including thighs, hips, buttocks, abdomen, and chin. A new technique called liposhaving shows more promise at reducing cellulite.

Most liposuction procedures are performed under local anesthesia (loss of sensation without loss of consciousness) by the tumescent, or wet, technique. In this technique, large volumes of very dilute local anesthetic (a substance that produces anesthesia) are injected under the person's skin, making the tissue swollen and firm. Epinephrine is added to the solution to reduce bleeding, which allows the removal of larger amounts of fat.

The physician first numbs the skin with an injection of local anesthetic. After the skin is desensitized, the doctor makes a series of tiny incisions, usually 0.12–0.25 in (3–6 mm) in length. Flooding the area with a larger amount of local anesthetic, fat is then extracted with suction through a long, blunt hollow tube called a cannula. The doctor repeatedly pushes the cannula through the fat layers in a radiating pattern creating tunnels, thus removing fat and recontouring the area. Large quantities of intravenous fluid (IV) are given during the procedure to replace lost body fluid. Blood transfusions might be necessary.

Some newer modifications to the procedure include the use of a cutting cannula called a liposhaver and the use of ultrasound to help break up the fat deposits. The person is awake and comfortable during these procedures.

The cost of liposuction can vary depending upon the standardized fees in the region of the country where it is performed, the extent of the area being treated, and the person performing the procedure. Generally, small areas such as the chin or knees can be done for as little as $500, while more extensive treatment such as when hips, thighs, and abdomen are done simultaneously can cost as much as $10,000. These procedures are cosmetic and are not covered by most insurance policies.

Liposuction is most successful when performed on persons who have firm, elastic skin and concentrated pockets of fat in areas that are characterized by cellulite. To get good results after fat removal, the skin must contract to conform to the new contours without sagging. Older persons have less elastic skin and, consequently, may not be good candidates for this procedure. People with generalized fat distribution, rather than localized pockets, are not good candidates. People with poor circulation or who have had recent surgery at the intended site of fat reduction are not good candidates.

Candidates should be in good general health and free of heart or lung disease.

The doctor will conduct a physical examination and may order blood work to determine clotting time and hemoglobin level for transfusions, in case the need should arise. The person may be placed on antibiotics immediately prior to surgery to ward off potential infection.

After the surgery, the person will need to wear a support garment continuously for two to three weeks. If ankles or calves were treated, support hose will need to be worn for up to six weeks. The support garments can be removed during bathing 24 hours after surgery. A drainage tube under the skin in the area of the procedure may be inserted to prevent fluid build-up.

Mild side effects can include a burning sensation at the site of the surgery for up to one month. The candidate should be prepared for swelling of the tissues below the site of the operation for up to six to eight weeks after surgery. Wearing the special elastic garments will help reduce this swelling and help to achieve the desired final results.

The incisions involved in this procedure are tiny, but the surgeon may close them with metal stitches or staples. These will be removed the day after surgery. However, three out of eight doctors use no sutures, relying on dressings to cover the incisions. Minor bleeding or seepage through the incision site(s) is common after this procedure. Wearing the elastic bandage or support garment helps reduce fluid loss.

Liposuction is virtually painless. However, for the first postoperative day, there may be some discomfort that will require light pain medication. Soreness or aching may persist for several days. A person can usually return to normal activity within a week. Postoperative bruising will go away within 10 to 14 days. Postoperative 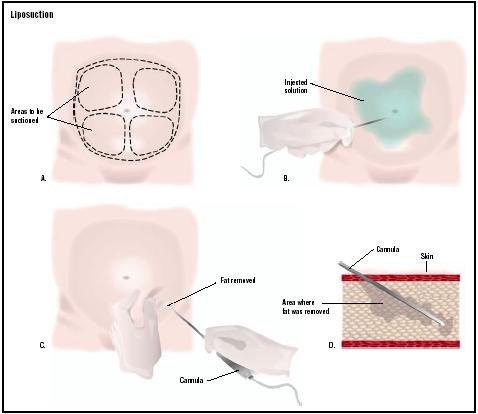 The areas to be treated during liposuction are marked before surgery (A) and then injected with a solution to aid in fat removal (B). The surgeon inserts a cannula into the areas (C), then suctions out fat with a back and forth motion (D). (
Illustration by GGS Inc.
)
swelling begins to go down after a week. It may take three to six months for the final contour to be reached.

Liposuction under local anesthesia using the tumescent (wet) technique is exceptionally safe. Two recent large studies reached similar conclusions. One concluded that there were no serious complications or deaths with liposuction. The other study calculated the risk of any complication to be 1%. However, as with any surgery, there are some risks and serious complications. Death is possible, but extremely unlikely.

The main hazards associated with liposuction surgery involve migration of a blood clot or fat globule to the heart, brain, or lungs. Such an event can cause a heart attack, stroke, or serious lung damage. However, this complication is exceedingly rare. The risk of blood clot formation is reduced by wearing a special girdle-like compression garment after the surgery, and with the resumption of normal mild activity soon after surgery.

Remaining in bed increases the risk of clot formation, but not getting enough rest can also result in increased swelling of the surgical area. Such swelling is a result of excess fluid and blood accumulation, and generally comes from not wearing the compression garments. If necessary, this excess fluid can be drained off with a needle in the doctor's office.

Infection is another complication, but this rarely occurs. If the physician is skilled and works in a sterile environment, infection should not be a concern.

If too much fat is removed, the skin may peel in that area. Smokers are at increased risk for shedding skin because their circulation is impaired. Another and more serious hazard of removing too much fat is that the person may go into shock. Fat tissue has an abundant blood supply and removing too much of it at once can cause shock if the fluid is not replaced.

A rare complication is perforation, or puncture, of an organ. The procedure involves pushing a cannula vigorously through the fat layer. If the doctor pushes too hard or if the tissue gives way too easily under the force, the blunt hollow tube could possibly injure internal organs.

Liposuction can damage superficial nerves. Some persons lose sensation in the area that has been suctioned, but most feeling usually returns with time.

The loss of fat cells is permanent. The person should have smoother, more pleasing body contours without excessive bulges. However, if a person overeats, the remaining fat cells will grow in size. Although lost weight may be regained, the body should retain the new proportions and the suctioned area should remain proportionally smaller.

Tiny scars about 0.25–0.5 in (6–12 mm) long at the site of incision are normal. The doctor usually makes the incisions in concealed places such as along skin folds, where the scars are not likely to show.

In some instances, the skin may appear rippled, wavy, or baggy after surgery. Pigmentation spots may develop. The re-contoured area may be uneven. This unevenness is common, occurring in 5–20% of the cases, and can be corrected with a second liposuction procedure that is less extensive than the first.

The morbidity rate from liposuction is under 1%. Mortality is exceedingly rare.

Some of the alternatives to liposuction include modifying diet to lose excess body fat, exercise, accepting one's body and appearance as it is, or using clothing or makeup to downplay or emphasize body or facial features.

Many liposuction surgeries are performed by plastic surgeons or by dermatologists. Any licensed physician may legally perform liposuction. Liposuction may be performed in a private professional office, an outpatient center, or in a hospital.