A cholecystectomy is performed to treat cholelithiasis and cholecystitis. In cholelithiasis, gallstones of varying shapes and sizes form from the solid components of bile. The presence of these stones, often referred to as gallbladder disease, may produce symptoms of excruciating right upper abdominal pain radiating to the right shoulder. The gallbladder may become the site of acute infection and inflammation, resulting in symptoms of upper right abdominal pain, nausea, and vomiting. This condition is referred to as cholecystitis. The surgical removal of the gallbladder can provide relief of these symptoms. Cholecystectomy is used to treat both acute and chronic cholecystitis when there are significant pain symptoms. The typical composition of gallstones is predominately cholesterol, or a compound called calcium bilirubinate.

Most patients with cholelithiasis have no significant physical symptoms. Approximately 80% of gallstones do not cause significant discomfort. Patients who develop biliary colic generally do have some symptoms. When gallstones obstruct the cystic duct, intermittent, extreme, cramping pain typically develops in the right upper quadrant of the abdomen. This pain generally occurs at night and can last from a few minutes to several hours. An acute attack of cholecystitis is often associated with the consumption of a large, high-fat meal.

The medical management of gallstones depends to a great degree on the presentation of the patient. Patients with no symptoms generally do not require any medical treatment. The best treatment for patients with symptoms is usually surgery. Laparoscopic cholecystectomy is typically preferred over the open surgical approach because of the decreased recovery period. Patients who are not good candidates for either type of surgery can obtain some symptom relief with drugs, especially oral bile salts.

Cholecystitis is an inflammation of the gallbladder, both acute and chronic, that results after the development of gallstones in some individuals. The most common symptoms and physical findings associated with cholecystitis include: 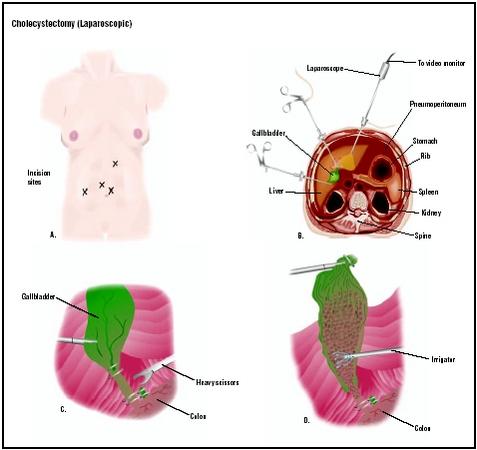 In a laparoscopic cholecystectomy, four small incisions are made in the abdomen (A). The abdomen is filled with carbon dioxide, and the surgeon views internal structures with a video monitor (B). The gallbladder is located and cut with laparoscopic scissors (C). It is then removed through an incision (D). (
Illustration by GGS Inc.
)

Overall, cholelithasis is found in about 20,000,000 Americans. An overwhelming majority of these individuals do not ever develop symptoms. Overall, about 500,000 to 600,000 (2–3%) are treated with cholecystectomies every year. Typically, the incidence of cholelithasis increases with age. The greatest incidence occurs in individuals between the ages of 40 and 60 years. The following groups are at an increased risk for developing choleliathiasis:

Overall, patients with cholelathiasis have about a 20% chance of developing biliary colic (the extremely painful complication that usually requires surgery) over a 20-year period.

Acute cholecystitis develops most commonly in women between the ages of 40 and 60 years. Some ethnic groups such as Native Americans have a dramatically higher incidence of cholecystitis.

The laparoscopic cholecystectomy involves the insertion of a long, narrow cylindrical tube with a camera on the end, through an approximately 0.4 in (1 cm) incision in the abdomen, which allows visualization of the internal organs and projection of this image onto a video monitor. Three smaller incisions allow for insertion of other instruments to perform the surgical procedure. A laser may be used for the incision and cautery (burning unwanted tissue to stop bleeding), in which case the procedure may be called laser laparoscopic cholecystectomy.

In a conventional or open cholecystectomy, the gallbladder is removed through a surgical incision high in the right abdomen, just beneath the ribs. A drain may be inserted to prevent accumulation of fluid at the surgical site.

The initial diagnosis of acute cholecystitis is based on the following symptoms:

Most patients have elevated leukocyte (white blood cells) levels. Leukocyte levels are determined using laboratory analysis of blood samples. Traditional x rays are not particularly useful in diagnosing cholecystitis. Ultrasonography of the gallbladder usually provides evidence of gallstones, if they are present. Ultrasonography can also help identify inflammation of the gallbladder. Nuclear imaging may also be used. This type of imaging cannot identify gallstones, but it can provide evidence of obstruction of the cystic and common bile ducts.

Cholelithiasis is initially diagnosed based on the following signs and symptoms:

As with any surgical procedure, the patient will be required to sign a consent form after the procedure is explained thoroughly. Food and fluids will be prohibited after midnight before the procedure. Enemas may be ordered to clean out the bowel. If nausea or vomiting are present, a suction tube to empty the stomach may be used, and for laparoscopic procedures, a urinary drainage catheter will also be used to decrease the risk of accidental puncture of the stomach or bladder with insertion of the trocar (a sharp, pointed instrument).

Postoperative care for the patient who has had an open cholecystectomy, as with those who have had any major surgery, involves monitoring of blood pressure, pulse, respiration, and temperature. Breathing tends to be shallow because of the effect of anesthesia, and the patient's reluctance to breathe deeply due to the pain caused by the proximity of the incision to the muscles used for respiration. The patient is shown how to support the operative site when breathing deeply and coughing and is given pain medication as necessary. Fluid intake and output is measured, and the operative site is observed for color and amount of wound drainage. Fluids are given intravenously for 24–48 hours, until the patient's diet is gradually advanced as bowel activity resumes. The patient is generally encouraged to walk eight hours after surgery and discharged from the hospital within three to five days, with return to work approximately four to six weeks after the procedure.

Care received immediately after laparoscopic cholecystectomy is similar to that of any patient undergoing surgery with general anesthesia. A unique postoperative pain may be experienced in the right shoulder related to pressure from carbon dioxide used in the laparoscopic tubes. This pain may be relieved by lying down on the left side with right knee and thigh drawn up to the chest. Walking will also help increase the body's reabsorption of the gas. The patient is usually discharged the day after surgery and allowed to shower on the second postoperative day. The patient is advised to gradually resume normal activities over a three-day period, while avoiding heavy lifting for about 10 days.

Potential problems associated with open cholecystectomy include respiratory problems related to location of the incision, wound infection, or abscess formation. Possible complications of laparoscopic cholecystectomy include accidental puncture of the bowel or bladder and uncontrolled bleeding. Incomplete reabsorption of the carbon dioxide gas could irritate the muscles used in respiration and cause respiratory distress. While most patients with acute cholecystitis respond well to the laparoscopic technique, about 5–20% of these patients require a conversion to the open technique because of complications.

In a small minority of cases, symptoms will persist in patients who receive cholecystectomy. This has been named the post-cholecystectomy syndrome and usually results from functional bowel disorder, errors in diagnosis, technical errors, overlooked common bile duct stones, recurrence of common bile duct stones, or the spasm of a structure called the sphincter of Oddi.

Acute cholecystitis usually improves following conservative therapy in most patients. This conservative therapy involves the withholding of oral feedings, the use of intravenous feedings, and the administration of antibiotics and analgesics . This is only a short-term alternative in hospitalized patients. Most of these patients should receive cholecystectomy within a few days to prevent recurrent attacks. In the short-term, patients often receive narcotic analgesics such as meperidine to relieve the intense pain associated with this condition. Patients who have evidence of gallbladder perforation or gangrene need to have an immediate cholecystectomy.

In patients with cholelithasis who are deemed unfit for surgery, alternative treatments are sometimes effective. These individuals often have symptom improvement after lifestyle changes and medical therapy. Lifestyle changes include dietary avoidance of foods high in polyunsaturated fats and gradual weight loss in obese individuals. Medical therapy includes the administration of oral bile salts. Patients with three or fewer gallstones of cholesterol composition and with a gallstone diameter less than 0.6 in (15 mm) are more likely to receive medical therapy and have positive results. The primary requirements for receiving medical therapy include the presence of a functioning gallbladder and the absence of calcification on computed tomography (CT) scans. Other non-surgical alternatives include using a solvent to dissolve the stones and using sound waves to breakup small stones. A major drawback to medical therapy is the high recurrence rate of stones in those treated.

Cholecystectomy, including the laparoscopic approach, is usually performed by a general surgeon who has completed a five-year residency training program in all components of general surgery and in particular proper techniques involving the use of the laparoscope. If surgery is being considered, it is a good idea to find out how many laparoscopic cholecystectomies the surgeon performs on a yearly basis. Laparoscopic cholecystectomies are often performed in the specialized department of a general hospital, but they are also performed in specialized gastrointestinal clinics or institutes for gastrointestinal disorders.

Just would like to get more information about the food restriction if any in particular for a patient undergone lap cholecystectomy.
2
Errolf Zoleta

I undergone a open surgery cholecystectomy about 1yr. now.But I sufferd from indigestions about 4mos. and 6mos after my operation.Is it normal side effects of post chole?Can you advice me on what are my do's and dont's as a post cholecystectomy patient.thank you.hope to hear from you soon

When a patient has cholelithiasis,what is actually removed, is it just the stones or is it the gallbladder.
4
bet

what is the connection of the diagnosis of a patient with cervical cancer s/p nephrostomy left and right. for him to have a cholecystectomy surgery?
5
faresam

VERY GOOD
I BREFAER ADDED VEDIO
ADN CASE THAT HALP US
THANK YOU VERY MUCH
6
M.Akram

I want to ask that before surgery of gall bladder ,it is necessary to insert the urinary catheter