Cardiopulmonary resuscitation, commonly called CPR, combines rescue breathing (one person breathing into another person) and chest compression in a lifesaving procedure performed when a person has stopped breathing or a person's heart has stopped beating.

When performed quickly enough, CPR can save lives in such emergencies as loss of consciousness, heart attacks or heart "arrests," electric shock, drowning, excessive bleeding, drug overdose, and other conditions in which there is no breathing or no pulse. The purpose of CPR is to bring oxygen to the victim's lungs and to keep blood circulating so oxygen gets to every part of the body. When a person is deprived of oxygen, permanent brain damage can begin in as little as four minutes and death can follow only minutes later.

There are three physical symptoms that indicate a need for CPR to be performed immediately and for emergency medical support to be called: unconsciousness, not breathing, and no pulse detected. 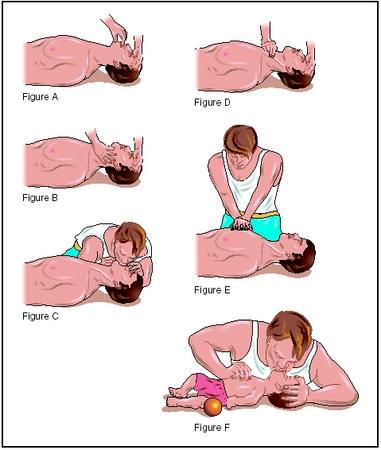 CPR in basic life support. Figure A: The victim should be flat on his back and his mouth should be checked for debris. Figure B: If the victim is unconscious, open airway, lift neck, and tilt head back. Figure C: If victim is not breathing, begin artificial breathing with four quick full breaths. Figure D: Check for carotid pulse. Figure E: If pulse is absent, begin artificial circulation by depressing sternum. Figure F: Mouth-to-mouth resuscitation of an infant. (
Illustration by Electronic Illustrators Group.
)

Unconsciousness is when the victim seems to be asleep but has lost all awareness and is not able to respond to questions or to touch or gentle shaking. A sleeping person will usually respond to a loud noise, shouting, or gentle shaking. An unconscious person will not respond to noise or shaking. When unconscious, a person can not cough or clear the throat, which can block the windpipe and cause suffocation and death. People with a major illness or injury or who have had recent surgery are at risk for losing consciousness. If the person has fainted, which is brief unconsciousness, the cause may be dehydration (lack of body fluids), low blood pressure, or low blood sugar. This is a temporary condition. If the victim is known to have diabetes, a bit of fruit juice may revive the person once they have regained consciousness.

Just before a person loses consciousness, symptoms may include:

Not breathing, which is also called apnea, is the lack of spontaneous breathing. It requires immediate medical attention. The victim may become limp and lifeless, have a seizure, or turn blue. Prolonged apnea is called respiratory arrest. In children, this can lead quickly to cardiac arrest in which the heart stops beating. In adults, cardiac arrest usually happens first and then respiratory arrest. The common causes of apnea in adults are obstructive sleep apnea (something blocks the airway during sleep), choking, drug overdose, near-drowning, head injury, heart irregularities (arrhythmia, fibrillation) or cardiac arrest, nervous system disorders, or metabolic disorders. In children the causes may be different, such as prematurity, bronchial disturbances or pneumonia, airway blockage or choking on a foreign object, holding the breath, seizures, meningitis, regurgitating food, or asthma attacks.

If the rescuer is unable to detect a pulse or has difficulty in feeling a pulse it can be an indication of the use of improper technique by the rescuer, or shock or cardiac arrest in the victim. If a sudden, severe decrease occurs in pulse quality (such as pulse weakness) or pulse rate (how many beats in a minute) when other symptoms are also present, life-threatening shock is suspected. The rescuer may need to explain to a doctor or medical professional where on the victim's body the pulse was measured, if the pulse is weak or absent altogether, and what other symptoms are present.

Medical help and CPR are needed immediately if any of these symptoms is found. Time is critical. A local emergency number should be called immediately. If more than one person is available to help, one can call 911 or a local emergency medical service, while the other person begins CPR. Ideally, someone CPR certified performs the procedure. Local medical personnel, a hospital, or the American Heart Association teaches special accredited CPR courses. If a critically ill patient or post-operative patient is being cared for at home, it is a good idea for a family member to take a CPR course to be better prepared to help in case of an emergency.

The steps usually followed in CPR are as follows:

There are certain important precautions for rescuers to remember in order to protect the victim and get the best result from CPR. These include:

The description above is not a substitute for CPR training and is not intended to be followed as a procedure.

L.O.V.E your wedsite keepup the good work. Ok it does serve people lives especially in hurricane ,accident, and sickness thank for you kindness.
2
clotilda

CAN YOU PLEASE SEND ME A PICTURE OF AIRWAY BREATHING CIRCULATION!
3
HAIDAR HUSSAIN

I HAVE COMPLETED MY CPR COURSE BUT I WANT TO LEARN MORE ABOUT CPR.
4
FireGirl

Good information, what exactly do cx compressions do? Try to get the blood to circulate through the body? Never did say on here
5
sudheer

nice and useful for any person in need.i understood many things from your website thanks to this.....
6
BETTY

As a medical student this is really helping.kudos guys
7
belle

cardiopulmonary resuscitation.hope this can help you
8
kristen

cardiopulmonary resuscitation.hope this can help you
9
mercy

I have to learn more about CPR, please send this procedure to my email add thanks for learning, GOD Bless
11
Ram

Please send me this procedure, thanks in advance, God Bless
12
tomi

THANK YOU VERY MUCH FOR THE INFORMATION i GATHERED . i NEED IT VERY BADLY ON MY TRAININING TOMORROW.
14
Raji

Thanks,I am a healthcare provider(paramedics)am realy happy with what I have read,but will like to have more send tn my e-mail.thanking u in advance.
15
Domnic Mung'ang'a

thanks so much about your article it has realy helped me gain some knowledge that will help me saves someones life some where.
16
Gajender Gandrath

THANK YOU VERY MUCH FOR PROVIDING THE INFORMATION ABOUT THE MATTER WHICH I HAVE REQUIRED.
I HOPE THE AHA GUIDLINES ARE UPDATED FOR 2010.
17
Trudie Coetzee

Great and valuable information, thanks a lot, expecting more with images and
19
Reuben

covered this topic when i was doing my first aid training. so good and helpful
20
ali

this is very helpful.pls send this to me..id like to share this to my friends also.im sure they will appreciate it.. Im glad i opened ur site.thank you very much..
22
Mudessar

I wish i would have known this information earlier. I lost my 15 months son in February due to drowning and rushed to medical center without doing any CPR. Even the Doctors did not bother doing CPR to him and declared him dead although in less than 13 to 18 (the time of his drowning) minutes i reached hospital.
23
Dusty Hoipkemier

I am cpr cert. N recently came across a motorcycle accident the woman was not breathing but there was a heartbeat...she unfortunately did not make it although I still did cpr. Is that ok to do cpr when a heartbeat is detected but she is not breathing?