Bronchoscopy is a procedure in which a hollow, flexible tube called a bronchoscope is inserted into the airways through the nose or mouth to provide a view of the tracheobronchial tree. It can also be used to collect bronchial and/or lung secretions and to perform tissue biopsy.

During a bronchoscopy, the physician can visually examine the lower airways, including the larynx, trachea, bronchi, and bronchioles. The procedure is used to examine the mucosal surface of the airways for abnormalities that might be associated with a variety of lung diseases. Its use may be diagnostic or therapeutic.

Bronchoscopy may be used to examine and help diagnose:

Bronchoscopy may also be used for the following therapeutic purposes:

Bronchoscopy can also be used to collect the following biopsy specimens:

If the purpose of the bronchoscopy is to take tissue samples or biopsy, a forceps or bronchial brush are used to obtain cells. Alternatively, if the purpose is to identify an infectious agent, a bronchoalveolar lavage can be performed to gather fluid for culture purposes. If any foreign matter is found in the airways, it can be removed as well.

The instrument used in bronchoscopy, a bronchoscope, is a slender, flexible tube less than 0.5 in (2.5 cm) wide and approximately 2 ft (0.3 m) long that uses fiberoptic technology (very fine filaments that can bend and carry light). There are two types of bronchoscopes, a standard tube that is more rigid and a fiberoptic tube that is more flexible. The rigid instrument does not bend, does not see as far down into the lungs as the flexible one, and may carry a greater risk of causing injury to nearby structures. Because it can cause more discomfort than the flexible bronchoscope, it usually requires general anesthesia. However, it is useful for taking large samples of tissue and for removing foreign bodies from the airways. During the procedure, the airway is never blocked since oxygen can be supplied through the bronchoscope.

In 2000, the National Hospital Discharge Survey and the National Survey of Ambulatory Surgery Reports outlined the following rates for bronchoscopy with or without biopsy at short-stay hospitals in the United States:

According to the National Cancer Institute, cancer of the lung and bronchi is the second most common cancer among both men and women and is the leading cause of cancer death in both sexes in the United States. Among men, lung cancer incidence rates per 100,000 people range from a low of approximately 14 among American Indians to a high of 117 among African Americans. Between these two extremes, rates fall into two groups ranging from 42 to 53 for Hispanics, Japanese, Chinese, Filipinos, and Koreans and from 71 to 89 for Vietnamese, Caucasians, Alaska natives, and Hawaiians. The range among women is much narrower, from a rate of about 15 among Japanese to nearly 51 among Alaska Natives, only a three-fold difference. Rates for the remaining female populations fall roughly into two groups with low rates of 16–25 for Korean, Filipino, Hispanic, and Chinese women, and rates of 31–44 among Vietnamese, Caucasian, Hawaiian, and African American women. The rates among men are about two to three times greater than the rates among women in each of the racial/ethnic groups.

Bronchoscopy is usually performed in an endoscopy room, but may also be performed at the bedside. The patient is placed on his back or sits upright. A pulmonologist, a specialist trained to perform the procedure, sprays an anesthetic into the patient's mouth or throat. When anesthesia has taken effect and the area is numb, the bronchoscope is inserted into the patient's mouth and passed into the throat. If the bronchoscope is passed through the nose, an anesthetic jelly is inserted into one nostril. While the bronchoscope is moving down the throat, additional anesthetic is put into the bronchoscope to anesthetize the lower airways. The physician observes the trachea, bronchi, and the mucosal lining of these passageways looking for any abnormalities that may be present. If samples are needed, a bronchial lavage may be performed, meaning that a saline solution is introduced to flush the area prior to collecting cells for laboratory 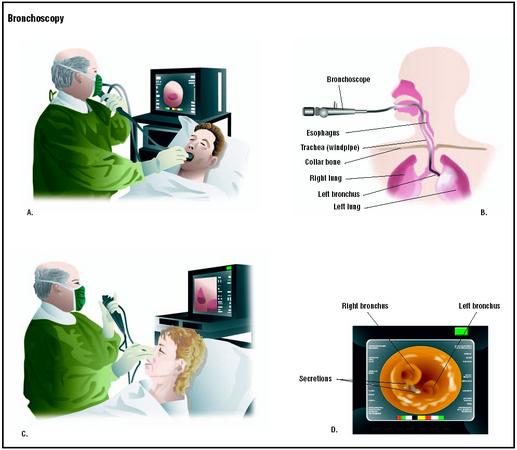 Bronchoscopy can be performed via the patient's mouth (A) or through the nose (C). During the procedure, the scope is fed down the trachea and into the bronchus leading to the lungs (B), providing the physician with a view of internal structures (D). (
Illustration by GGS Inc.
)
analysis. Very small brushes, needles, or forceps may also be introduced through the bronchoscope to collect tissue samples from the lungs.

The patient should fast for six to 12 hours prior to the procedure and refrain from drinking any liquids the day of the procedure. Smoking should be avoided for 24 hours prior to the procedure and patients should also avoid taking any aspirin or ibuprofen-type medications. The bronchoscopy itself takes about 45–60 minutes. Prior to the bronchoscopy, several tests are usually done, including a chest x ray and blood work. Sometimes a bronchoscopy is done under general anesthesia, in which case the patient will have an intravenous (IV) line in the arm. More commonly, the procedure is performed under local anesthesia, which is sprayed into the nose or mouth. This is necessary to inhibit the gag reflex. A sedative also may be given. A signed consent form is necessary for this procedure.

After the bronchoscopy, the vital signs (heart rate, blood pressure, and breathing) are monitored. Sometimes patients have an abnormal reaction to anesthesia. Any sputum should be collected in an emesis basin so that it can be examined for the presence of blood. If a biopsy was taken, the patient should not cough or clear the throat as this might dislodge any blood clot that has formed and cause bleeding. No food or drink should be consumed for about two hours after the procedure or until the anesthesia wears off. There is a significant risk for choking if anything (including water) is ingested before the anesthetic wears off, and the gag reflex has returned. To test if the gag reflex has returned, a spoon is placed on the back of the tongue for a few seconds with light pressure. If there is no gagging, the process is repeated after 15 minutes. The gag reflex should return in one to two hours. Ice chips or clear liquids should be taken before the patient attempts to eat solid food.

Patients are informed that after the anesthetic wears off the throat may be irritated for several days.

Patients should notify their health care provider if they develop any of these symptoms:

If the results of the bronchoscopy are normal, the windpipe (trachea) appears as smooth muscle with C-shaped rings of cartilage at regular intervals. There are no abnormalities either in the trachea or in the bronchi of the lungs.

Bronchoscopy results may also confirm a suspected diagnosis. This may include swelling, ulceration, or deformity in the bronchial wall, such as inflammation, stenosis, or compression of the trachea, neoplasm, and foreign bodies. The bronchoscopy may also reveal the presence of atypical substances in the trachea and bronchi. If samples are taken, the results could indicate cancer, disease-causing agents, or other lung diseases. Other findings may include constriction or narrowing (stenosis), compression, dilation of vessels, or abnormal branching of the bronchi. Abnormal substances that might be found in the airways include blood, secretions, or mucous plugs.

Bronchoscopy belongs to the group of procedures associated with highest inpatient mortality with a 12.7% mortality rate.

Depending upon the purpose of the bronchoscopy, alternatives may include a chest x ray or a computed tomography (CT) scan. If the purpose is to obtain biopsy specimens, one option is to perform surgery, which carries greater risks. Another option is percutaneous biopsy guided by CT.

The test is usually performed in a hospital or clinic by a pulmonologist, a physician specializing in diseases of the lungs. Nursing staff assist by providing education, monitoring the patient, and conducting tests, including checking blood pressure, pulse, and respiratory rate prior to the patient's discharge.

In most hospital settings there is ALWAYS a Respiratory Therapist assissting the Doctor. They set up the procedure, assist in obtaining specimines, and do constant patient assesment.
Scott Baker RRT
2
Karrie Hammer

My father has been in and out of the hospital with testing for cancer in his right lung with a large mass. He just recently had a bronchoscopy done and the Dr. Office called and said it may take 4-6 weeks to get results back. My concern is that he has been going thru various testing for 3 months now and we still do not have any results. Could someone please inform me of what if the standard wait time to receive bronchoscopy results back? Thanks, Karrie
3
lisa gleason

I have been waiting for my bronchoscopy results for over three weeks. It is very frustrating. If someone could explain the reason for the length of time, it would be helpful to me.
4
dr.khalid

iam recently qallified pulmonolgist my question is were can i trained my self in recognised center.
5
Jenn

Had a Bronch done this past Wed... had no complications and actually felt better (except for getting violently ill from the morphine!) since he suctioned/lavaged everything... it's nearly 4 days later and it hurts like hell to cough now!! When will this diminish??!! It also seems like I'm just full of the thickened phlemg again... Any takers of this one??
6
James R Miller

One week ago I had a bronchosocy test performed at Wilford Hall Medical center by a team of professionaals.
The reason I had it done was because I was coughing up blood with my speutum.

The results indicated that I had several small white lesions on my right lung.

My provider and surgeon informed me that because I was a heavy smoker in the past, that is why I have those lesions because of past damage to my lung.

I have heard from others that this might prove dangerous to me if bleeding does occur in the gathering of the leisons and if they are cancerous, could they spread?

I am a 73 white-male; ex-smoker and consumer of alcohol in the past.

I would appreciate any feedback concerning his comments made to me after the procedure. Thank You,

i am getting ready to have a bronch, and all these emails are old, and who answers them? some of my issues were addressed, but i am a little afraid of the whole procedure. please keep me in your prayers as the Drs. are trying to rule out cancer.
8
ethan

I am just wondering how long after a bronchoscopy performed in negative pressure can the ROOM be used again? I am working with a hospital and we are attempting to gather data on the procedure. Thank you!
9
Kevin

What determines the route of entry of the bronchoscopic procedure using the nose or mouth? Why is one route chosen over the other?
10
Chris

I recently had a thoractomy and everything came out negative. The spot was just scar tissue from previous pneumonia. Now they pulmonist wants to do a broncio test even though all previous tests came back negative. Is this new procedure really needed???
11
Sandra

Had my bronchoscopy done yesterday, everything went well until I got to my ward where I started having shortness of breath,stayed on oxygen support for half the night. It was terrible. Now I have body aches,my neck,under the rib cage on my abs and on the sides and my back. I can't even laugh the pain is terrible. Any ideas what to do?
12
Harmanpreet Singh

If the patient has had two previous bronchoscopies. Is there a difference in the secretions from the first two bronchoscopies to this current scope?