Patent urachus repair is surgery to correct a urachus (a tube that connects the fetal bladder to the umbilical cord) that fails to close after birth.

A patent urachus is an anomaly, and repair is recommended for these defects occurring at birth.

The condition occurs three times more often in male infants than in females. 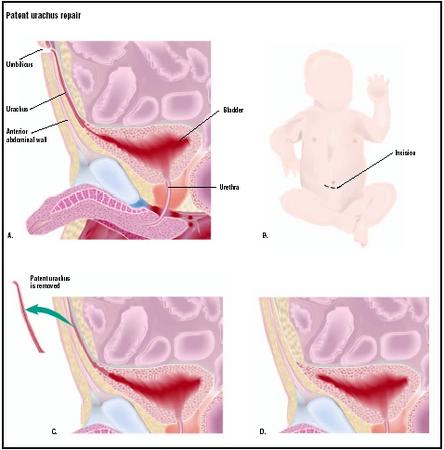 As fetal development progresses, the urachus, a tube that can measure from 1.2–3.9 in (3–10 cm) long and 0.3–0.4 in (8–10 mm) in diameter, forms, extending from the front dome of the bladder to the umbilicus. Following birth, the tube, adjacent to the umbilical ligaments, closes and itself becomes ligament. Should this closure fail, it may result in several types of urachal remnants. If the urachus remains completely open, it is known as a patent urachus. This type of abnormality makes up 50% of all urachal anomalies.

If the urachus remains open all the way to the bladder, there is the danger that bacteria will enter the bladder through the open tube and cause infection. For this reason, the patent urachus of the infant must be removed.

This anomaly occurs as an isolated event or in association with prune-belly syndrome, in which there is continuous drainage of urine from the umbilicus. If urine freely discharges through the umbilicus, the patent urachus is rarely found. It should be suspected, however, if a local cord is enlarged and affected with edema, or is slow to slough normally. The condition customarily is diagnosed in infants.

The child is given a general anesthetic, after which an incision is made in the lower abdomen.

Surgery for patent urachus repair may require several days' hospitalization, during which infants can be fed as normal.

Risks are the same as for those patients receiving any anesthesia: a reaction to medication and/or breathing problems. There is also the risk of bladder infection or bladder leaks. In the latter case, a catheter is put in place until the bladder heals.

The outcomes of patent urachus repair in infants are excellent, as a rule, and most children recover rapidly.

Patent urachal anomalies do not usually cause significant morbidity or mortality. However, adenocarcinoma has been reported in adults with urachal remnants, presumably from chronic inflammation and infection. Patency is noted in only 2% of adults.

Sometimes more conservative treatment than surgery is advised, with radical excision reserved for persistent or recurring cases. Because the urachus may not completely close at birth, but may close within the first few months of the infant's life, observation may be advised before moving forward with surgery.


Patent urachus repair is performed by the pediatric surgeon in a hospital setting.

I find it interesting evertime I find some new information on urachal andenocacinoma only because there is so little and I need all the information I can get because I have this cancer. I never heard of it ever before and find it most challenging to find out how to survive it. I wish there was more help because I was told there is no cure for it just surgery.
3
M-

Took 10 years for them to find this in me. The surgery is SOOO not as bad as dealing with it and nobody knowing what was wrong. Was lucky, no cancer here just a lot of pain. Still no information out there about this condition.
4
huda

Thanks about this article,is there any other alternative to treatment rather than the surgery and what are the possible investigation options for definitive diagnosis?
5
sarah

I just wanted to say a huge thank you, this page was able to tell me the correct name of what condition my daughter was born with. It would be good it this condition was made more aware of by the doctors. At my local hospital my 12 week scan showed a cyst on the umbilical cord, after repeated scan, offeres of termination I was told everything was fine. When delivered my daughter umbilical cord was 3 times the size it should have been, being rushed to hospital (I had a home birth) the doctors had no idea what was wrong, transfereing to London hospital the doctor immediatley could tell it was urine leaking from the umbilical cord and surgery took place the next morning, my daughter was a day old. She is now just over 2, has a little outy belly button, no different from her sisters and has had no problems at all. Thanks to this site I can now say she was born with patent urachus. Thanks againxx
6
kirti

Thanks for information. I have question my daughter had patent urachus rapair, but she still having same symptoms she had before. Drainage from umbilical, moist and curst bulid up in umbilical. can you help me what should I do next.
Thanks you
7
Noel

Baby, I found this article last night at exactly 11:48 pm... I couldn't sleep :(
It offers great info regarding the patent urachus.
I luv the part that suggests that it may take months after the birth of a child for the belly button to completely seal off ( under ALTERNATIVES)...I will not allow a surgery on my baby any time soon. Also I like the questions it suggests to ask the doctor regarding postponment of the surgery.
Luv u n Kate ;) always & forever
8
rasheedah

what effect does patent urachus have on new borns and how early can they have it?
9
not saying

I'm 55 years old and this is my diagnosis. I still don't know why the doctors can't figure out why I have something coming out my navel.
10
alma aslor

Why my patent urachus painful sometimes?
Sometimes when i feel that pain i cannot move anymore.
11
Teresa

i have gad symptoms of Urachal Remnant since 2002 but Urologist in my town would not treat it. Since Jan 2016 I have been in Severe pain daily. I found a wonderful Urologist at Emory and have surgery scheduled for 5/16/16. I would Love to hear from anyone that has had this experience and the surgery as an adult!
12
Donna J. Koenig

I have had my first bout with this. I wondered why I'd had 2 bladder infections this year when I've never had one before. The other night my first & only symtom occured I awoke to find me & my bed soaked. I thought I'd urinated in bed (which would have been odd too). The next evening I realized I had a small amount if dried blood in my belly button & a strange film inside it too; then it dawned on me where the urine came from. At first I wasn't sure if it was urine because there was little to no odor, but the blood in my belly button let me know for sure & that was only because I knew someone who had this disorder about 25 years ago. This, being a rare disorder, I never thought I'd have it too & not to mention when I'm 54 years old. So far I haven't had anything else exit my navel at all, so I don't know if It will happen again or not. Also, I haven't had any bladder or low-abdominal pain; it's all just so odd & strange!!! :[
13
Cherie

I presently have an infection. Several years ago, I found out that many people get yeast infections in their belly buttons. I started treating my umilicous with otc yeast infection medicine. It always cleared up right away. But the infection I have now is not.

I sometimes asked other people if they felt any connection from their umilicous to their bladder or urethra. No one ever said they did, and thought it was weird that I did.
14
anthony paolozzi

at the age of 30 years old I had pain in my belly button which started to grow outwards like a tube of pasta and giving a smelly discharge, after going into hospital for laparoscopy a patent urachus was found which I was told was a very rare condition, this was remedied after 6 hours of surgery and 3 weeks in hospital, however I lived with constant stomach pain for 10 years which I learned to live with, im now aged 63 and I have noticed a large bulge at the end of the old scar and my gp said it looks like a large hernia of some kind, sometimes its painful and I can only describe it as having cramp, hopefully surgeons will give some answers soon. looking back before the original surgery I always had pain in my back which disappeared after urachus surgery.
15
OLUCHI

Please, my baby is about a year and 5 months now. she was diagnosed of patent urachus when she was one week but the surgery could not take place because catretha could not passed,so we discharged and asked to come back. After some time it stopped but it has started again but I don't have money to go for the surgery now. Please is there any risk attached to it and is there any other alternative treatment? Please I need answers. Thanks.
16
Maya

I was treated 7 years ago, I don't have urine licking from my belly anymore. I'm now 23 and I have been wondering if I may encounter any problems during pregnancy due to my surgery, will my baby be affected? Will Conceiving and giving birth be an issue? Do I still have a connection where my baby's EC will be connected to mine?