An episiotomy is a surgical incision made in the perineum, the area between the vagina and anus. Episiotomies are done during the second stage of labor to expand the opening of the vagina to prevent tearing of the area during the delivery of the baby.

An episiotomy is usually done during the birthing process in order to deliver a baby without tearing the perineum and surrounding tissue. Reasons for an episiotomy include:

Some experts believe that an episiotomy speeds up the birthing process, making it easier for the baby to be delivered. Speed can be important if there is any sign of distress that may harm the mother or baby. Because tissues in this area may tear during the delivery, another reason for performing an episiotomy is that a clean incision is easier to repair than a jagged tear and may heal faster. Although episiotomies are sometimes described as protecting the pelvic muscles and possibly preventing future problems with urinary incontinence, it is not clear that the procedure actually helps.

In 2000, one study calculated the percentage of episiotomies performed in the United States out of all vaginal deliveries to be 19.4%. This was a dramatic reduction from the 1983 rate of 69.4%. Episiotomy rates were higher among white women (32.1%) than African American women (11.2%). Similar differences have been reported in other obstetric procedures (e.g. cesarean section and epidural use).

An episiotomy is a surgical incision, usually made with sterile scissors, in the perineum as the baby's head is being delivered. This procedure may be used if the tissue around the vaginal opening begins to tear or does not seem to be stretching enough to allow the baby to be delivered.

In most cases, the physician makes a midline incision along a straight line from the lowest edge of the vaginal opening toward the anus. In other cases, the episiotomy is performed by making a diagonal incision across the midline between the vagina and anus (called a mediolateral incision). This method is used much less often, may be more painful, and may require more healing time than the midline incision. After the baby is delivered through the extended vaginal opening, the incision is closed with stitches. A local anesthetic may be applied or injected to numb the area before it is sewn up (sutured).

Episiotomies are classified according to the depth of the incision: 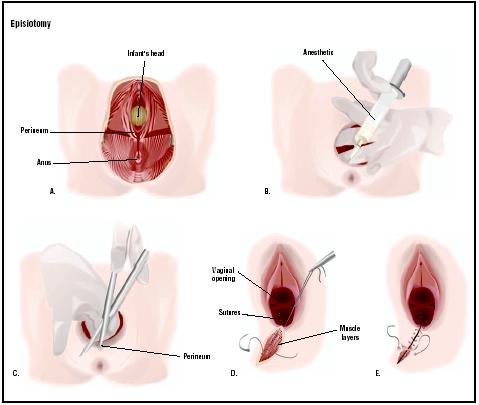 During childbirth, the area called the perineum is often cut to facilitate delivery (A). First, a local anesthetic may be given (B). The perineum is cut on an angle with scissors (C). After delivery, the layers of muscle and skin are repaired (D and E). (
Illustration by GGS Inc.
)

Although there are some reasons for anticipating an episiotomy before labor has begun (e.g. breech presentation of the baby), the decision to perform an episiotomy is generally not made until the second stage of labor, when delivery of the baby is imminent.

The area of the episiotomy may be uncomfortable or even painful for several days. Several practices can relieve some of the pain. Cold packs can be applied to the perineal area to reduce swelling and discomfort. Use of a sitz bath can ease the discomfort. This unit circulates warm water over the area. A squirt bottle with water can be used to clean the area after urination or defecation rather than wiping with tissue. Also, the area should be patted dry rather than wiped. Cleansing pads soaked in witch hazel (such as the brand Tucks) are very effective for soothing and cleaning the perineum.

Several side effects of episiotomy have been reported, including infection (in 0.3% of cases), increased pain, increased bleeding, prolonged healing time, and increased discomfort once sexual intercourse is resumed. There is also the risk that the incision will be deeper or longer than is necessary to permit the birth of the infant. An incision that is too long or deep may extend into the rectum, causing more bleeding and an increased risk of infection. Additional tearing or tissue damage may occur beyond the episiotomy itself.

In a normal and well-managed delivery, an episiotomy may be avoided altogether. If an episiotomy is considered necessary, a simple midline incision will be made to extend the vaginal opening without additional tearing or extensive trauma to the perineal area. Although there may be some pain associated with the healing of the incision, relief can usually be provided with mild pain relievers and supportive measures, such as the application of cold packs.

Studies have found that the rates of urinary/fecal incontinence, postpartum perineal pain, and sexual dysfunction are generally the same between women who have had an episiotomy and those who had a spontaneous tear of the perineum. There does appear to be a higher risk of more extensive perineal trauma when an episiotomy is performed (20.9% experienced third- or fourth-degree lacerations) then when it is not (3.1% experienced major perineal damage).

It may be possible to avoid the need for an episiotomy. Pregnant women may want to talk with their care providers about the use of episiotomy during the delivery. Kegel exercises are often recommended during the pregnancy to help strengthen the pelvic floor muscles. Prenatal perineal massage may help to stretch and relax the tissue around the vaginal opening. During the delivery process, warm compresses can be applied to the area along with the use of perineal massage. Coaching and support are also important during the delivery process. Slowed, spontaneous pushing during the second stage of labor (when the mother gets the urge to push) may allow the tissues to stretch rather than tear. Also, an upright birthing position (rather than one where the mother is lying down) may decrease the need for an episiotomy.

An episiotomy is performed by the health care provider attending to a woman's labor and delivery, typically an obstetrician/gynecologist or midwife. An obstetrician/gynecologist is a medical doctor who has completed specialized training in the areas of women's general health, pregnancy, labor and childbirth, prenatal testing, and genetics. A midwife is a person who has been trained to provide care, support, and supervision to women in all stages of pregnancy, labor, delivery, and the postpartum period. The procedure is performed at the site of labor and delivery, most often a hospital or birth center.

After having a baby exactly 2years ago on this coming march 24 2004.
I had a episiotomy, and to this day I am still having major discomfort after having intercourse with my husband. It feels like my perineum splits everytime. Is there anything I can do or get to heal me.

I am binod married before 1 year i am like to child but not good news so knowladge to ater sex and time to sex in under wife.
3
niyitegeka sylvestre

I found this site after checking third degree episiotomies...as I was told I had one by the nurse immedately after my third, and final, child. The baby was my biggest, 7lbs 10 oz and I am not a big build. My doctor did do a massage but in the end it was the third degree type. I only remember the nurse saying to me you just had a third degree episiotomy with no explanation. I do not and don't have trouble with anything from it. I didn't want one, but my doctor knew that and he did do a pereneal massage during the labor and all so I don't know. I have three children. The first was an emergency c-section I was in the hospital AFTER I got an infection at that hospital, I did not have it when I entered. 10 days in a private hospital with no insurance and an emergency c. My duaughter was a vbac and no drugs no nothing, and my last one I asked for drugs for pain and would again as he was just a different delivery. I am grateful regardless of the procedures, that all my children are healthy and happy. I wondered if sex for my husband was not as good but I don't worry about that anymore as I asked him to leave for different reasons and I do not regret it.
5
Nicole

I had a third degree episiotomy with my second child almost 11 months ago because he was unsuspectantly breech while I was delivering him. I never even heard of an episiotomy until after my son came out and they talked about stitches. I never had any issues with tearing or pain with sex after it was healed.
6
Kat

I was wondering if anyone can give me some words Of advise. I had my baby almost 2 weeks ago and my doc just check my stitches and told me I might need to be restitched and I need to watch for feces by my vagina well I saw a like yellow/orange discharge on my pad should I be worried or what?
7
ally s ally

The research on the page needs to be updated. 2002 is the newest reference. In research, that is seriously dated. In their conclusion, Viswanathan et al. (2005)stated that, "Our systematic review finds no health benefits from episiotomy." Check out:
Carroli, G., & Mignini, L. (2008). Episiotomy for vaginal birth. Cochrane Database of Systematic Reviews

I had an episiotomy as a teen or pre-teen in the 1970's because the gynecologist recommended it for "easier tampon insertion" and "more comfortable sex" later on. I consented because my mother left the decision up to me. But I remember this surgery as traumatic and leaving many aftereffects. Has anyone heard of any gynecologist doing this? Am I the only one who was subjected to this poor medicine? If you reply to this post, and have any knowledge of other survivors of gynecological surgery as teens, let me know. THanks! I regret that this happened to me and that I said yes. To this day I am left with fear of surgeries and mistrust of doctors. The procedure was performed as inpatient surgery in a hospital through their o.r.
10
lizzy

Hi my episiotomy is 4weeks now but for few days back,the pain has increased with a milky yellowish dischargge.am in infected.pls Help.
11
Roxanne

I had an episiotomy which got infected 4 days later and the stitches started coming loose, I went to get it restitched and I have been given two sets of antibiotics as well as pain meds just to find that the second stitching is also coming loose and an infection is there again. Any advise we are home treating this with salt baths and salon, water sprayed when I urinate and after and putting betterdene on the area that's open. Do u think this will heal or will I need to go to hospital again?? I can't look after my new born and it's frustrating that have this happen twice. I have asked my medial aid to remove this gyne off my specialis. I refuse to go back to this doctor that has such a bad attitude and can clearly see she doesn't really care what service she provides. I want to get better now and enjoy my maternity leave with my new born and family. Not sure who can give me advise.
12
sukhvir